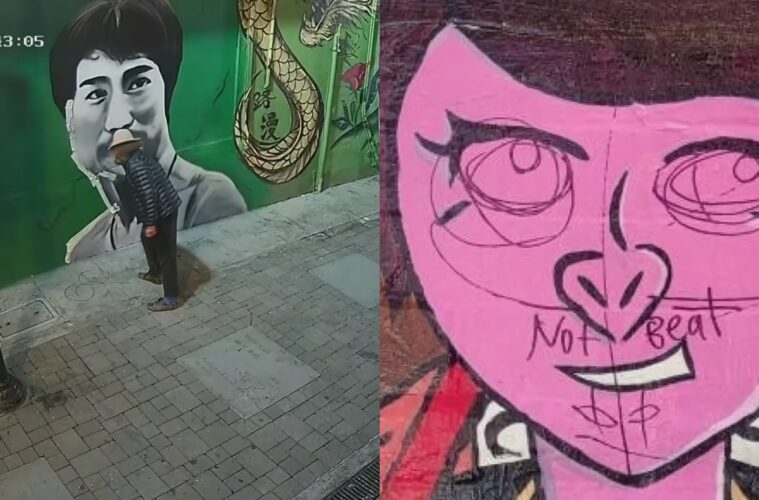 "You have no right to deface symbolic symbols like Bruce Lee, and Cai Shen, the god of wealth and prosperity"

San Francisco murals celebrating Asian culture have been defaced by a man on multiple occasions.

CCTV footage shows the man on 8 May walking through Jack Kerouac Alley, which is located between Chinatown and North Beach. He then proceeds to draw a pen from a beg and using it to deface the murals.

On 12 April, the man was also seen writing “Loose Lee” and “I’ll be back” on a mural of Bruce Lee.

“You should be ashamed of yourself,” said MaCannaYo. “This is a very strong community. It’s the oldest Chinatown in the United States, and you have no right to deface symbolic symbols like Bruce Lee, and Cai Shen, the god of wealth and prosperity.”

The artist has used her own funds to clean the graffiti but requires more funds to restore the work. She has since created a GoFundMe page to support the process.

“It’s very shocking that after all the work and the beautification that a lot of business owners are putting into their business, we continue to see crime – laundry shops being broken into, glasses being broken, people being attacked,” she added.

“We’re prioritizing the tools that we have, the legal tools, the ability and power and influence we have to defend and support and uplift civil rights,” said Attorney General Rob Bonta, who launched the Racial Justice Bureau within the State Department.

“We’re making sure that our school climates are fair and it’s safe and supportive, making sure that in the middle of this horrific hate crimes crisis, when it comes to the API community, that we’re stepping in and stepping up to help to prevent and educate on the front end.”

In Los Angeles, a jail inmate is also facing hate crime charges after attacking a female Asian American custody worker.
Meanwhile, an 11-year-old and 17-year-old were arrested for attacking and robbing an 80-year-old Asian man in San Leandro.
Most recently, an Asian store owner and his son have been stabbed by a customer who refused to wear a face mask in Tacoma.