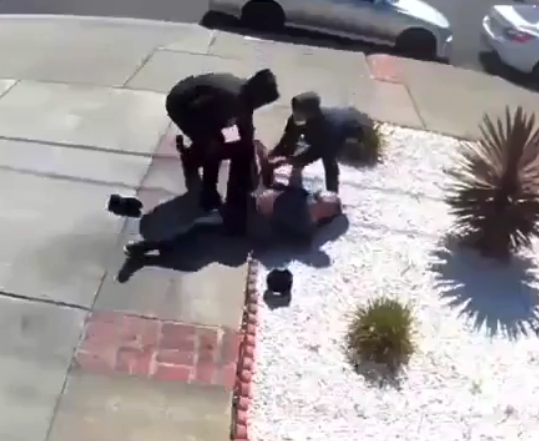 An 11-year-old and 17-year-old have been arrested for attacking and robbing an 80-year-old Asian man in San Leandro.

Video footage shows the victim lying on the ground of his own driveway as the suspects attack him. Another suspect is waiting in a getaway car.

The victim sustained minor injuries and was robbed of his watch. He believes the attack was racially motivated.

Police have since revealed that the 11-year-old was behind the wheel of the stolen vehicle.

All suspects were arrested on Wednesday around 1:50 p.m.

“We are thankful that we were able to capture these juveniles safely and expeditiously,” said Lieutenant Ali Khan.

“Additionally, the 11-year-old male was driving a carjacking vehicle that was stolen on May 10 in Oakland,” police said.

The 11-year-old has an extensive criminal history and was previously arrested for several robberies and carjackings.

After his arrested, he was released into the custody of his mother due to his young age.

There has been a recent rise in attacks against Asians including a suspect was also arrested for robbing and stabbing an Asian man in San Francisco.