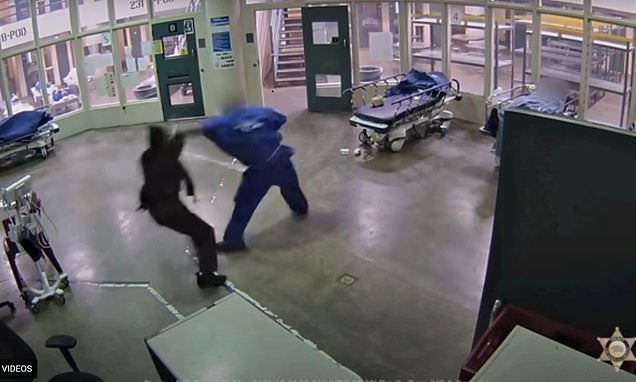 The victim had when tried to hand him toilet paper when Meza launched his unprovoked attack.

CCTV footage shows Meza punching the victim in the face, causing her to fall down. He then repeatedly punches her in the face as she lays on the ground, before casually walking towards a stretcher and waiting for guards to restrain him.

The county Sheriff’s Department revealed Meza’s left hand was freed from his waist chain as he had requested to use the restroom.

It added that the victim was taken to hospital with face and head injuries.

Meza has since been taken to a high-security area and could face charges of assault and committing a hate crime.

The suspect had been arrested Monday night in suburban El Monte on suspicion of committing a felony.

There has been a recent rise in attacks against Asians including a man who racially abused an Asian American detective is now facing a lawsuit.

Most recently, an Asian shop owner has been punched in the face by a racist customer in Washington DC.