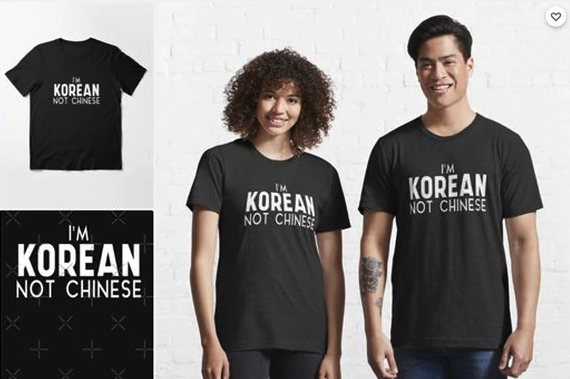 ‘I’m Korean Not Chinese’ T-shirts have sparked a rift between Asian American communities.

According to Hong Kong tabloid Apple Daily and Chinese state media China Daily, the shirts were being sold on Australian fashion company Redbubble.

Typing “I am not Chinese” into the website’s search box reportedly reveals 187 results of anti-Chinese slogans.

Many shirts claimed the wearer was from an Asian country such as Japan, the Philippines, Singapore, South Korea or Thailand, with the slogan “I’m not Chinese” under it.

The shirts were called out by critics as “grotesque” and discriminatory against Chinese people. Social media users reportedly called the shirts “malicious” and “the work of losers.”

“These slogans have obvious connotations,” the paper states. “They are isolating Chinese in a time when it is imperative for all Asian-Americans to stand together.”

“‘Yes, I am Asian. No, I am not Chinese'” also puts double pressure on Chinese Americans amid increasing cases of anti-Asian hatred. Chinese-Americans must tolerate discrimination from white supremacy as well as exclusion from Asian ethnic groups.”

“When the world calls for zero tolerance of racism and anti-Asian hatred, provoking dissension among Asians only peddles discrimination and fuels racial hatred.”

The shirts have since been removed from the platform.

There has been a recent rise in attacks on Asians across America. Recent attacks against the country include an Asian woman who was hit in the face in Philadelphia.