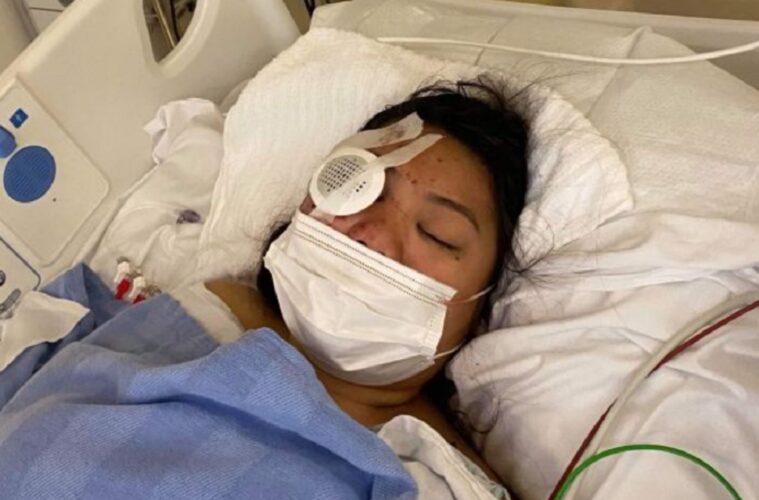 19-year-old Asian hate crime victim shot in the eye, gets diagnosed with Coronavirus whilst in care

Jessica Dimalanta is permanently impaired and is unable to chew

A 19-year-old Asian hate crime victim has been shot in the in San Francisco.

According to the GoFundMe page set up to support the teenager, Jessica Dimalanta was shot over the weekend.

A group of men had exited their vehicle and began shooting. A bullet struck Dimalanta in the face, going straight though her right eye.

Doctors removed the shell but fragments remain embedded in her face. Dimalanta survived the incident but is permanently impaired and is unable to chew.

Police are investigating the incident but the family are certain it was a hate crime.

The young victim is currently “in her hospital bed distraught, in pain, suffering emotionally, physically, and mentally from this situation.”

Dimalanta was also recently diagnosed with diabetes as well as Coronavirus.

“Jessica will need medical care, is afraid for her life, and does not want to go outside because she fears something else is happening to her. She will require physical and mental therapy in the future,” the GoFundMe page adds.

Dimalanta, who just turned 19 this month, was due to start school this week to become a healthcare provider.

“Jessica is the sweetest, kind, caring person with an angelic voice, loves to sing and spend time with her family. She helps her single mother take care of her younger siblings, nieces, and nephews. She did not deserve to have to suffer like this. No one deserves this at all.”

“My family is asking for prayers, any support, justice for Jessica, and to stop hate crime. It is a challenging time for our family as it is already with this pandemic, so my family and I are creating this GoFundMe page to help with her recovery and medical bills. Any donations will be greatly appreciated.”

The GoFundMe page also highlighted the rise in anti-Asian violence. “We also want to bring awareness to the anti-Asian violence and racism that is evolving around us. Let’s, please work together to stop senseless violent hate crimes and continue to take care of one another.”

“We are praying for past and current victims of these crimes, and hope we can move toward a safer & more inclusive society.”

Most recently, an Asian American family received a racist letter just after their father’s funeral.

Elsewhere, a man urinated on an Asian American woman on the New York Subway.

Also in the city, man has been arrested and charged with a hate crime for attacking an Asian American mother who was attending an anti-hate rally in New York City.