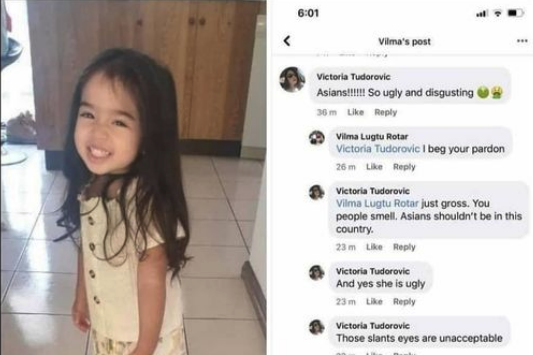 "Get some sticky tape to open your eyes"

A racist woman was caught making racist comments on a picture of a 2-year-old Asian girl.

Sandy Lee Fortuno posted screenshots of the exchange on her Facebook.

“Asian hate crime against a beautiful 2 year old. My beautiful daughter. Name and shame this disgrace of a human @victoriatud #asianhatecrimes,” Fortuno captioned the stills.

“Asians!!!!! So ugly and disgusting” Tudorvic wrote in one comment, with vomiting emojis.

“Bye Asians get some sticky tape to open your eyes,” she wrote in another.

“You people smell. Asians shouldn’t be in this country,” continued in another message.

“And yes she is ugly,” Tudorvic added. “Those slant eyes are unacceptable.”

When Tudorvic’s account was restricted following her tirade of abuse, the racist woman sent a lengthy message to Fortuno complaining about it.

“My FB account has been restricted thanks to you or someone you know and those Asians you call family,” she wrote.

“I am now pissed off. Say whatever you want to or get more people to falsify that your kids look like they should be North Koreans,” Tudorvic continued.

Even more recently, an Asian American mother was stabbed to death by a homeless woman in Riverside, and a woman in Seattle was arrested and charged with a hate crime for threatening her Asian American neighbour.

Yesterday, it was reported that an Asian man was arrested for kidnapping and attempting to sexually assault a woman in retaliation for anti-Asian hate crimes.

Asian hate crime against a beautiful 2 year old. My beautiful daughter.
Name and shame this disgrace of a human @victoriatud
#asianhatecrimes