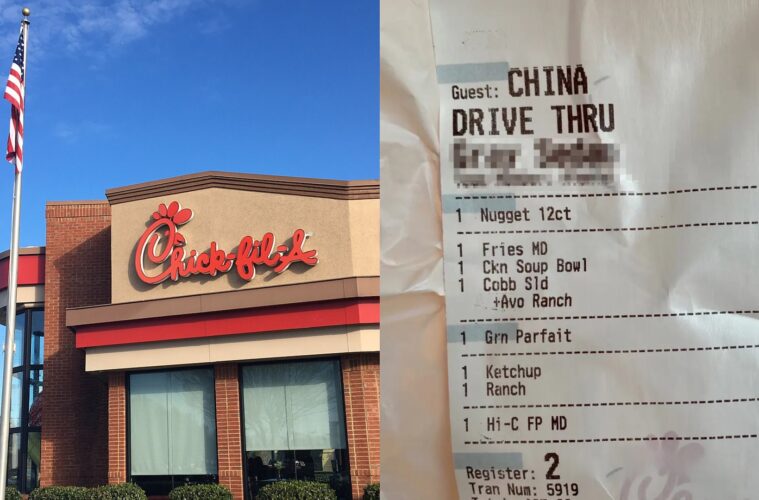 Chick-fil-A lists customer’s name as ‘China’, claims it was a ‘misunderstanding’ after mishearing ‘Tina’

Chick-fil-A has come under fire for listing a customer’s name as “China” instead of “Tina.”

Tina, who only wishes to be identified by her first name, went to one of the restaurant’s Houston chain on 22 March to pick up her order.

The employee at the drive-thru took her order and inputted her name in the iPad system.

When Tina was handed her receipt, she noticed her name was listed as “China.”

“Then it dawned on me,” she said, stating that it did not feel like a misunderstanding.

“I always make a point to say ‘tee-na,’ especially when wearing my mask,” she said, emphasising her name.

Tina also said that her order was scanned through her app, which showed the employee her name digitally.

“I’d hope that they are educated and I wouldn’t have to deal with this,” Tina said.

In response, the restaurant claimed it was simply a misunderstanding and that the Chick-fil-A staff misheard “Tina.”

“We want our customers to have a great experience, but it sounds like that didn’t happen this time. We know we can’t undo what happened, but we’d love another chance to get it right. I spoke with my team members from that shift and they informed me that they misheard ‘Tina’ as ‘China’ and that it had nothing to do with your ethnicity,” the manager said, adding that Tina was offered a free meal for the inconvenience.

“You hear about it in the news, you see it, but I didn’t think this would happen to me, especially not in Houston,” Tina said. “I don’t care about free stuff, I just want them to take corrective action.”

“I would think [Chick-fil-A] would be more sensitive and take it more seriously,” she continued. “I don’t want to get anyone fired, I just want to know that they’re doing something.”

A Chick-fil-A spokesperson said the employee involved felt terrible about the incident.

“Chick-fil-A strives to be a welcoming environment for all and believes racism has no place in society. It is our understanding that this is a case of a restaurant Team Member misunderstanding a guest’s name. But that does not negate the impact of the words or the experience of our guest. We sincerely apologize for any harm caused by this incident,” a Chick-fil-A spokesperson told Insider in an email.

Tina also received a voicemail from the restaurant’s general manager. “Please remember that most of our employees are young and do not recognize how something as simple as putting the wrong name can cause a catastrophe such as this and ultimately hurt the feelings of valued customers,” it said.

Nonetheless, Tina feels let down by the fast food restaurant in light of the recent surge in anti-Asian sentiment

“Given the recent rise in Asian hate crimes, discrimination against the Asian community, and especially with CFA being headquartered in Atlanta where the recent shooting took place — I would hope that CFA would take this seriously,” she wrote.