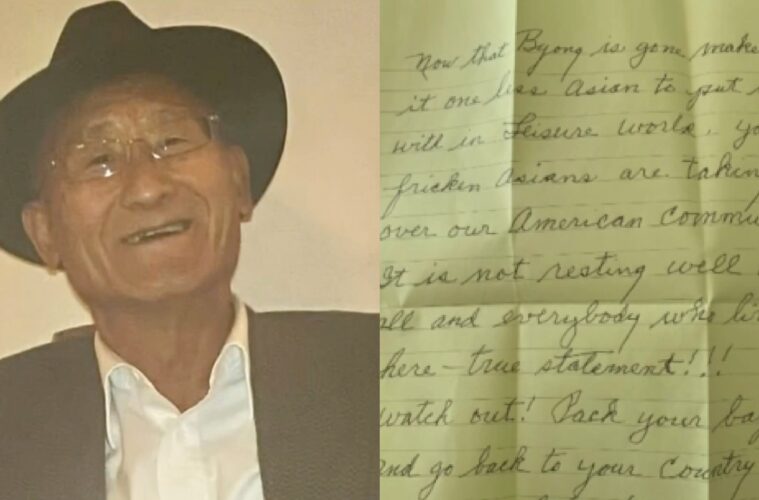 ‘One less Asian to put up with’: Family receives racist letter following father’s funeral in California

"You frickin' Asians are taking over our American community!"

An Asian American family has received a racist letter just after their father’s funeral.

Claudia Choi had laid her father, Byong, to rest in Leisure World, Soul Beach. Later that day, the family received a hate-fuelled letter addreseed to them.

“Now that Byong is gone, makes it one less Asian to put up with in Leisure World,” the letter stated.

“You frickin’ Asians are taking over our American community!” It continued. “Watch out! Pack your bags and go back to your country where you belong!”

Choi told CBS how outraged the family are. “To target a grieving widow, it’s disgusting,” she said. “They postmarked it on the day of my father’s funeral. How cruel could you be? Shame on them.”

“Racism and hatred and cruelty needs to be denounced at every turn,” Choi continued. “It’ not just when somebody gets beaten up, although that’s terrible or when women get murdered, that’s awful but when your neighbor says something like they need to go home or makes an Asian joke, you need to speak up and say that is not okay because these little things that we allow to pass lead to bigger things.”

Choi reported the letter to the police and the FBI, who are investigating using handwriting and fingerprinting analysis as well as DNA testing to identify the sender of the letter.

“Hate directed toward any member of our community is disgusting and will not be tolerated,” Seal Beach Police Chief Philip L. Gonshak said.

“Across the country, we are seeing more and more violence committed against Asian Americans and Pacific Islanders. We will not allow this to happen in Seal Beach. Our investigators are working hard to follow up on any and all leads we
receive.”

In a statement, Leisure World condemned the writer of the letter.

“This malicious and egregious act of hate speech threatens our core values of racial equity and social justice… We condemn in the strongest possible terms such action and that all actions will be taken to locate and prosecute the individual.”

Most recently, a man urinated on an Asian American woman on the New York Subway.

Also in the city, man has been arrested and charged with a hate crime for attacking an Asian American mother who was attending an anti-hate rally in New York City.

In other news, San Francisco Firefighters are volunteering to patrol Chinatown streets following the spike in anti-Asians attacks in the city.