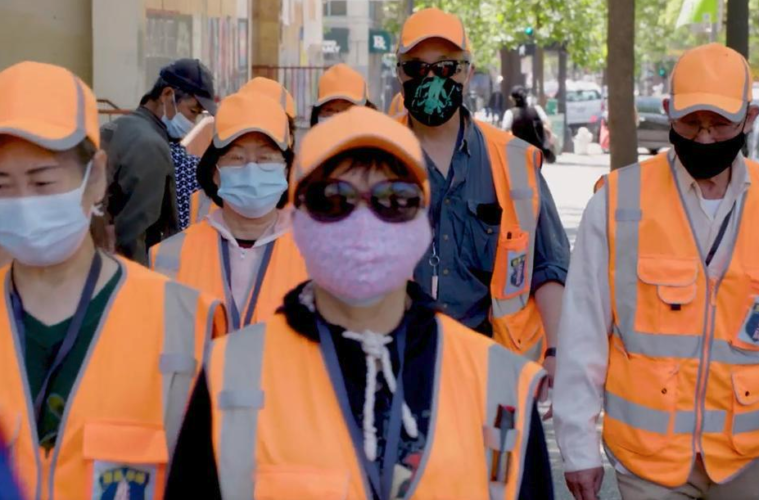 Asian Americans are once again patrolling the streets in Oakland to protect the elderly from attacks.

The East Bay Toishan Association, a group of mostly seniors, are patrolling the Bay Area in response to the surge in anti-Asian crimes.

David Won, a 59-year-old financial services professional who lives in Oakland, saw the group on patrol and was inspired to join as “being out there is the right thing to do.”

“I can’t even imagine punching somebody so hard that you’re going to break someone’s nose or pulling someone’s hair out,” Won said about the recent attacks. “I can’t even see how someone could actually even do that to another human being.”

“We try to just show our presence to try to make sure that the individuals that might be out there don’t try to commit any crimes.”

Known for organizing social events and Tai Chi classes for people from Taishan in China’s southern Guangdong province, the association is also gaining support from victims.

Oakland Chinatown Chamber President Carl Chan, who was attacked earlier this month, felt it was his duty to join the patrol too.

“I am so fortunate to be able to live another day to tell my story,” Chan said.

The patrol is not the first to have been organised in the city.

Back in March 2020, US Veterans were patrolling San Francisco Chinatown to combat racism.

In February 2021, a volunteer group called ‘Asians With Attitudes’ began patrolling the streets of Oakland too.

In other news, an Indian American MTA train operator has been awarded for saving the life of an Asian American who was pushed onto the tracks.