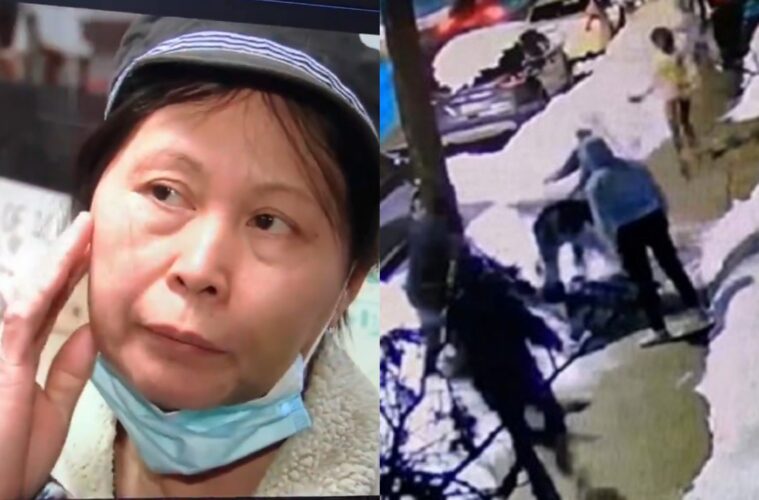 A Chinese pizzeria owner was brutally attacked and robbed by a group of men in Pennsylvania.

Ying Ngov, who owns and operates Mama Venezia’s Pizzeria, was assaulted by the group after they rushed into her pizzeria to steal beer.

Video footage shows the group of men peering into the shop’s window before putting on masks and running inside.

“I say, ‘You don’t pay for beer yet’ and they walked out,” recalled Ngov. “They don’t want to pay. They keep running. So I run too.”

The 56-year-old immigrant from China said she grabbed her neighbour’s shovel to protect herself.

“I protect myself. I know, maybe, they were going to hit me,” said Ngov.

One man is seen on the video pushing Ngov to the ground, whilst another punched her in face. The men then continue to beat her as she lay on the ground. Ngov then passed out.

Whilst Ngov simply wants renumeration for the stolen beers, her son-in-law Bryan Skipper said an arrest needs to be made.

“You hear things on the news where some people who are of Asian descent they keep to themselves, they try not to cause trouble. I hate to think that was the reason,” Skipper said.

Ngov’s message for the suspects was, “don’t do bad like that because people work hard every day.”

The incident follows a series of recent attacks on Asian Americans, including an Asian woman who had her car stolen after being attacked on Chinese New Year in Oakland.

In other news, a Filipino American navy veteran has died after police knelt on his neck for almost five minutes.

This is 56 year old Ying Ngov. She owns a pizzeria in Norristown. Last Friday suspects came to her store and stole beers. She ran after to get the beers back. The grown men push her to the ground and beat her. The security video is after the interview. More @ 11 @6abc pic.twitter.com/7zDrOqLmar