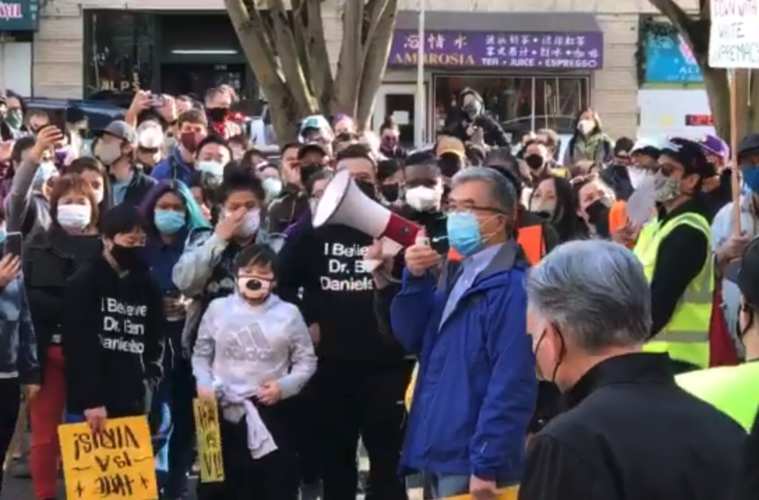 Hundreds of people gathered on Saturday to protest against violence towards Asian Americans.

A series of attacks on elderly Asian individuals have been recently plagued the country.

Just last week, an 83-year-old Korean grandmother was spit at and punched in the face in New York.

To demonstrate against the attacks amid the Coronavirus pandemic, hundreds rallied in Seattle’s Chinatown International Distrcit.

Former Washington Gov. Gary Locke, elected as the nation’s first Chinese American governor in 1996, led the crowd in a chant of “Hate is a virus!”

Speaking to the crowd, Locke emphasised that the US has a history of racist policies towards Asian Americans who have “always been treated like foreigners” and scapegoated.

“And it’s that constant infusion of people from all around the world — cultures, languages and ideas — that makes America great,” he said.

“This violence against Asian Americans, and especially our elderly, has got to stop,” Locke added, describing the perpetrators as “nothing but cowardly, racist thugs.”

Japanese language teacher Noriko Nasu, who was hit by a rock hidden in a sock, was among those in the rally.

Nasu told the crowd that she was frustrated with the King County Prosecuting Attorney’s Office who only charged her attacker Sean Holdip with two counts of second degree felony assault. He had faced a potential sentence of only 12 to 14 months behind bars.

“Do you feel they take our safety seriously?” Nasu asked the crowd.

“I was horrified to know that so many of us have experienced, and are experiencing, pain, and nothing has been done,” she said. “Those are silent stories. But we’re not going to be silent anymore.”

“It’s time for us to get angry,” Nasu added. “It’s time to demand justice.”

In other news, a ramen store in San Antonio has been vandalised after its owner spoke out against Texas’s reopening.