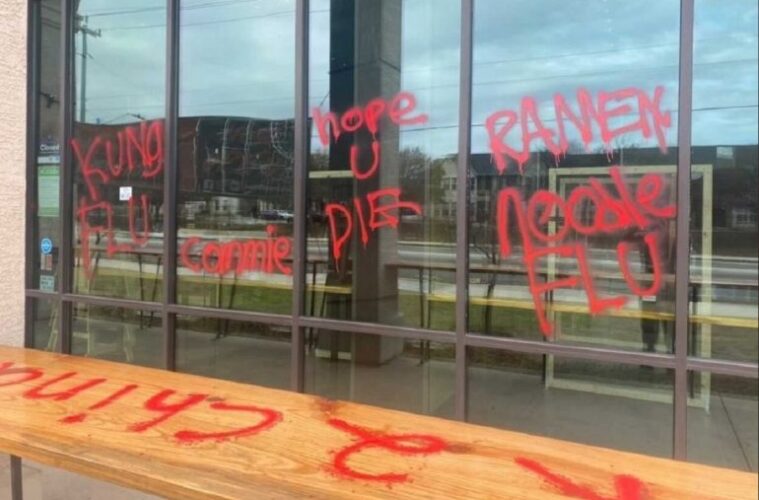 A ramen store in San Antonio has been vandalised after its owner spoke out against Texas’s reopening.

“His decision to drop the mask mandate is selfish and cowardly. There’s no reason to do it. A lot of us feel like he’s putting a lot of us in danger.”

Nguyen also highlighted how Asian Americans are being attacked across the country.

“Since I’m an Asian American, we’ve seen a lot of attacks against Asian Americans and that’s a huge concern for me,” Nguyen said. “We see all these incidents of that and this is an opportunity. It opens up that opportunity.”

On Sunday, Nguyen’s restaurant Noodle Tree was covered in racist slurs including “Kung flu”, threatening messages such as “hope u die”. Another one simply read “no masks”.

Nguyen believes the attack was in retaliation to expressing his views on CNN.

“I definitely know 100 percent it had something to do with the interview,” Nguyen said. “When you first see it, you’re kind of shocked, and then you realize this is real. Then, anger took over. I was so mad I ended up pacing back and forth trying to wrap my head around this.”

Local officials denounced the vandalism and police are investigating.

“Thank you to all the neighbors who showed up to help & proved that we’re better than this one hateful act,” Mayor Ron Nirenberg tweeted Sunday.

“We must work together to eradicate racism from our city.”

Dozens of customers and strangers helped Nguyen remove the graffiti from his store front, which was completely clean by the end of the day.

“Something like that, it’s very touching and very moving because my day started off with a lot of anger, hostility and I was hurt by this,” Nguyen said.

“And to see the support and the love of the community, it kind of helps you heal a little. San Antonians and Texans will not tolerate this.”

In other news, police are searching for two suspects who shot and killed a Vietnamese father outside his home in a carjacking.

Texas Gov. Abbott’s decision to lift the mask mandate is “selfish,” says Mike Nguyen, the owner of a restaurant in San Antonio who is battling cancer.

“Dropping the mask mandate will not help the economy, will not help us open. And a lot of us feel he’s putting…us in danger.” pic.twitter.com/wDWDPtH9a4