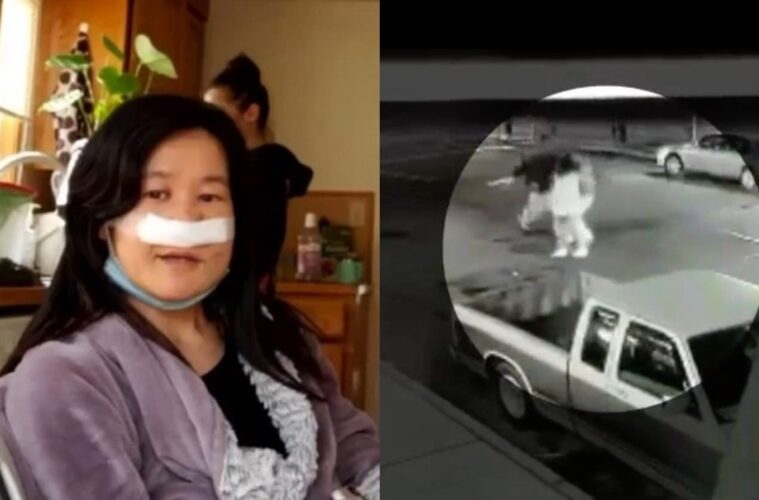 "I truly believe he was trying to kill us"

A Japanese language teacher was hit in the face with a rock inside a sock in Seattle Chinatown.

Noriko Nasu and her boyfriend Michael Poffenbarger were walking in Chinatown-International District on Wednesday when the unprovoked attack occurred.

CCTV footage showed Sean Jeremy Holdip, 41, whipping the makeshift weapon at Nasu’s face. As the Japanese American falls to the ground, the man attacks her boyfriend.

“I truly believe he was trying to kill us,” Poffenbarger said. “He hit her so hard (and) he hit me really really hard. I was amazed at how hard he hit my head and it didn’t knock me out. I thought for sure, I had a skull fracture.”

Nasu was knocked unconscious and suffered a fractured nose and several chipped teeth.

“I’m very very happy the police made it happen,” Poffenbarger said. “I won’t feel like it’s someone I pass or around the corner everywhere I go. I hope his arrest will help that stress fade.”

“She has three fractures in her nose right here. Her cheek and her mouth are super bruised. She’s got two black eyes and several teeth in the bottom are broken,” Poffenbarger said about his girlfriend. He also required eight stitches after being struck in the head.

Poffenbarger said his assailant singled out his girlfriend.

“It was very very deliberate and really focused on her,” he said about his girlfriend, who is a teacher and who is having difficulty speaking in the wake of the assault as a result. “He definitely targeted her (and) hit her first. She got the most injury out of it. It was a pointed attack on her.”

The couple were saved by good samaritans who witnessed the incident and intervened.

“If those people didn’t come out of the restaurant, if he didn’t feel the pressure of me calling for help, I don’t think he would have given up until we were dead,” said Poffenbarger.

In other news, a Malaysian man was punched and pushed in an unprovoked attack at a Manhattan subway station.