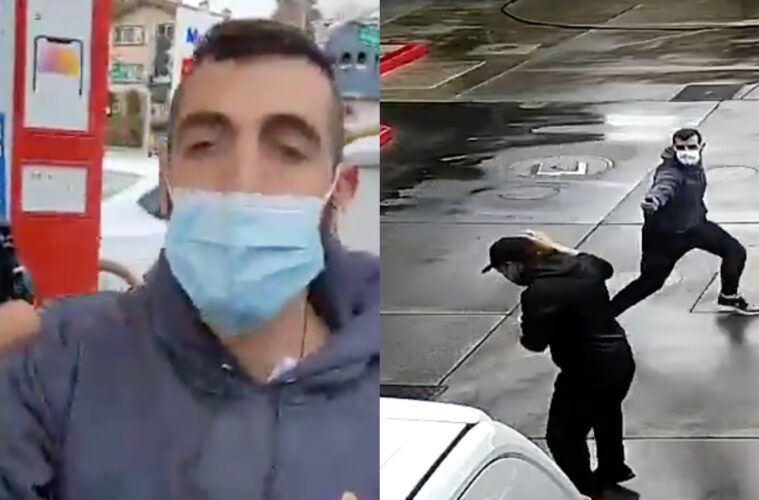 "You're not from here! You're Asian!"

An Asian gas station owner was pepper sprayed by a racist customer in Oakland.

The owner, who goes by Cwell, said the customer came in at 11am on Thursday and tried to pay with a pile of quarters. As the till was full, the gas station staff refused to accept the man’s quarters.

“My staff, she’s like, ‘well, wait, hold on there. You kind of have to take this to the bank because I can’t fit this all in the till,'” says Cwell.

The customer then became aggressive, shouting racist slurs at the gas station owner.

“He just started mouthing off… ‘You should go back to China,’ like that. We were just bursting out laughing because it was so unbelievable.”

As the customer threatened to return, Cwell followed him outside to capture his license plate.

Video footage taken by Cwell shows the man holding his middle finger up and shouting “go to China! Fuck you man! You have a small dick!”

Although not recorded on camera, Cwell said the customer then got into his car and reversed his vehicle at him. “He ends up reversing his car at me. I took it as an assault.”

The customer also pepper sprayed in the face, ultimately hospitalising him.

“The guy had pulled out his pepper spray and he had shot my face, arms. I ended up going to the ER to get taken care of,” Cwell said.

The gas station owner plans to press charges and said he has the following message, “I totally appreciate that you let me share my story because this has got to stop. I hope this brings awareness that everybody goes through the same stuff. We just have to understand that and understand that we all have to work together.”

The incident follows a series of attacks on Asian Americans across the country, especially in Oakland.

Earlier this month, a senseless attack in Oakland left a 75-year-old Asian man brain dead. The suspect was already out on probation.

A 91-year-old man was also violently pushed to the ground in Oakland’s Chinatown last month. The suspect had already been out on bail.

Most recently, 83-year-old Korean grandmother was spit at and punched in the face in New York.

Oakland gas station owner Cwell says this man made racially-charged statements after Cwell didn’t allow him to pay for his gas in quarters b/c they couldn’t all fit in the register. (1/4) pic.twitter.com/prZcG2G3sL

When Cwell noticed the man getting something in his pocket he grabbed some cleaning spray to protect himself.

But it was too late. Surveillance video shows the man spraying Cwell w/what looks like pepper spray. Cwell had to go to the ER. https://t.co/pD3j5HV3Fs pic.twitter.com/wivtxz2rTC

Here you can see the man and the pile of quarters. He seems to be irritated after both the cashier and Cwell say he can’t use them. The man starts recording. (3/4)https://t.co/pD3j5IcEx0 pic.twitter.com/o84wUKUWQd