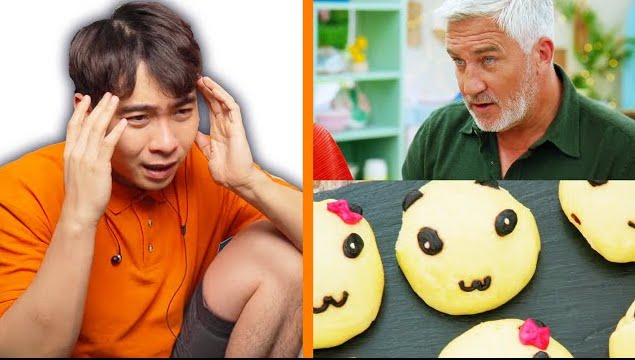 "Why don't we call this put random shit in bun week"

Towards the end of last month, the British TV cooking show was accused of racism after contestants cooked Chinese treats for ‘Japanese Week’.

Uncle Roger, whose real name is Nigel Ng, is known for taking down western cooking videos that attempt to make Asian food.

In his most recent video, Ng criticised the Great British Bake Off’s Japanese Week for putting “Chinese take away food in Japanese buns”.

Contestants in the show were tasked to make Japanese food but instead made buns with Chinese, Indian and American fillings.

“Uncle Roger love steam bun,” Ng says. “But I think steam bun is more Chinese than Japanese. Many Asian cultures have bun as food, because bun is our version of sandwich.”

“Uncle Roger live in UK so many year now, but I still don’t like sandwich. Sandwich is just two slice of bread. When you eat sandwich, shit fall out so easily. Not with bun. Bun is like sandwich, but better designed. Shit don’t fall out.”

In one segment, a contestant attempts to add katsu curry into his bun.

“No, this is not Katsu curry,” Ng says. “You’re using minced chicken breast? Katsu curry, the chicken needs to be breaded. That’s what Katsu mean, breaded chicken cutlet. You can’t just whack any chicken in any curry and call it Katsu curry. Haiya.”

When a contestant uses garlic, ginger, chilli, coriander, fish sauce, soy sauce,
honey and cumin, Ng states, “Why are you using fish sauce for Japanese week? Fish sauce is from Thailand, from South East Asia. What is happening here? I thought this is Japanese week. Where the Japanese stuff?”

Ng also highlights how a bottle of Lee Kum Kee Oyster Sauce is seen among the condiments.

“We see the bottle and the little yellow, oh, we know it’s Lee Kum Kee. Lee Kum Kee’s not Japanese, hiya! They got it wrong again.”

When another contestant goes on to mix Indian spices into his dough, Ng says, “Not only did they think Chinese is Japanese. Now they think Indian is Japanese also. Haiya. How many countries does Japan have? I don’t know if this is called Asian fusion
or Asian don’t know what they’re doing.”

Another contestant then makes burger buns. “How many more countries are you going
to do in Japanese week? Now America in Japan also? Instead of calling this Japan week, why don’t we call this put random shit in bun week!” Ng says.

Nonetheless, Ng concludes that he quite enjoyed the TV show but had some recommendations.

“This show is cute,” he says. “Uncle Roger likes certain part. But I don’t know why they want to call this Japanese week. It’s like these contestants, they all too British. They try to take Chinese take away food, put it in Japanese bun. So weird, so weird. I also don’t know why they chose bun.”

“This video not as bad as the BBC Food video. Not as bad as Jamie Oliver. But The Great British Bake Off people seem to think China, India, Japan, all the same country. Next time, you should just call this Asian week. So simple. Then everything you do in this show become correct.”

In related news, Ng was punched in the face in London in an alleged racist attack.