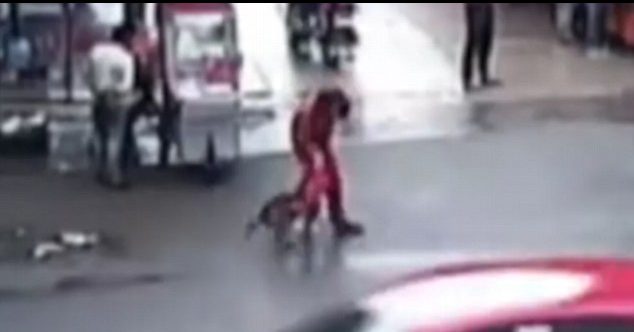 WATCH: Dog attacks more than 20 people in China before being shot dead by police

The youngest victim of the attacks was an 8 year old girl, whilst tis oldest was aged 75

A crazed dog savaged more than 20 people in China before the police shot it dead.

The CCTV footage shows the aggressive animal following a man in Guizhou Province before lunging at him and biting his leg. The man attempts to bat the dog away.

The dog reacts and dodges the man before jumping in the air and biting down on the man’s arm.

The video then shows the same animal cornering a cowering woman before launching an attack on her. The woman falls backwards into a car as she tries to hit the dog with her bag. The woman distracts the dog with her jacket, before it eventually runs away.

The vicious canine bit over 20 people, before it was cornered by officers who shot it dead. The animal reportedly rampaged through the streets for more than two hours.

The youngest victim of the attacks was an 8 year old girl, whilst tis oldest was aged 75.