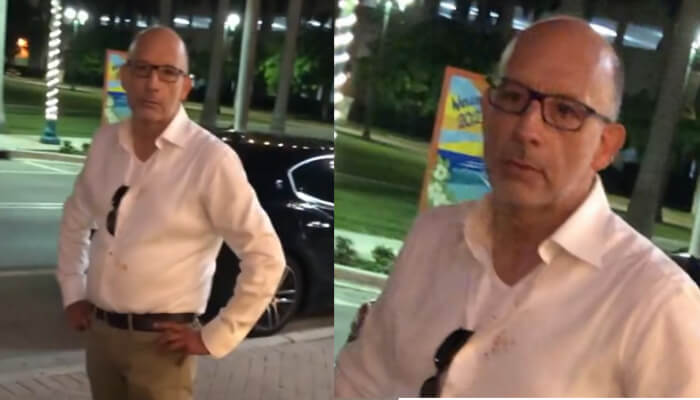 ‘Take your f**king China flu, shove it up your ass, Taiwanese chink’: Racist men caught on camera in Florida

Three men in Florida were caught on camera going on an expletive racist rant outside a ramen restaurant.

Louis Grayson, who owns Ramen Lab Eatery, took the video and posted it on Instagram.

The incident occurred after the restaurant asked the men to eat their pizza elsewhere as the workers were closing up for the night.

“I asked you nicely to leave, that’s about it,” an employee is heard saying in the video.

The man on camera responds, “take your fucking China flu and shove it up your ass, asshole fucking Taiwanese chink.”

“I’m over here, what you gonna do?” The man continues, gesturing next to him.

A second man on camera calls the employee a “sissy motherfucker” and a “communist” as another employee is heard in the background calling the police.

The public information manager for Delray Beach Police wrote said police responded to the incident but no charges were filed.

“No charges were filed in this case. An officer responded and met with the complainant and two men. The complainant states the males made negative comments and gestures. But the complainant knocked a slice of pizza out of one of the suspect’s hand, making the situation a mutual disagreement between parties.”

“We have zero tolerance for violence. We are a honest hard working business. We stand against any type of racism, harassments and discrimination. We pride ourselves in having a multicultural environment. Unfortunately, this situation was very heart breaking and will not break our spirits.”

“We will not accept this type of behavior and attack on anyone and especially to our staff. We do not tolerate any kind of hate. However this was after we politely ask 3 grown men to eat there pizza else where while we try to close and put away our tables.”

“If any one know or recognize these men please be careful and report them. We respect and love everyone however this is hard to grasp. We will not stand for it EVER and we hope justice will be served to these individuals.”

In other news, a man was caught on camera spewing racist abuse towards a gay Asian couple in San Francisco.