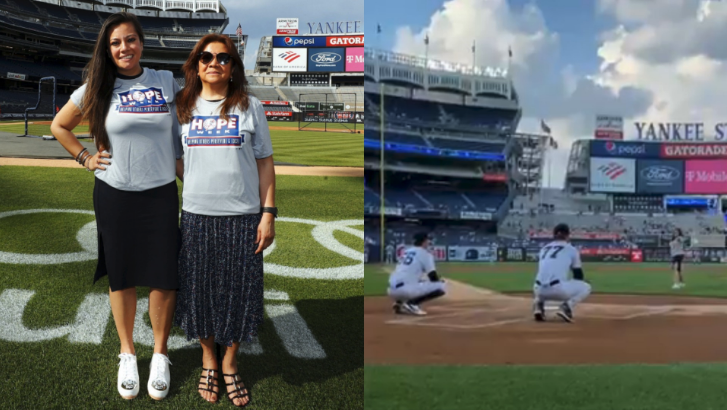 A victim of anti-Asian hate and her daughter have been honoured by throwing the first pitch at the New York Yankees stadium.

Vilma Kari, 65, was attacked in New York City earlier this year. Her attacker shouted “you don’t belong here” and spat at her.

Kari, who emigrated from the Philippines decades ago, was on her way to church in Hell’s Kitchen on 29 March when the unprovoked attack occurred. She suffered a fractured pelvis but fortunately recovered over time.

NYPD arrested the 38-year-old attacker and Kari several received messages of support, including some from other victims.

Kari then felt inspired to start a platform where victims could anonymously share their own stories – AAP(I belong).

“We all belong,” Vilma Kari said. “Each one of us has to reclaim that word, because we all belong here.”

Liz Kari, the victim’s daughter, was keen to be involved in the project after seeing the supportive messages from victims.

“Kind words from strangers have filled the void where anger and sadness would normally prevail,” Liz Kari said. “This inspired me to help create a platform where we can all share our recollections to show solidarity, strength and provide light to show that you and I belong here in America.”

On Tuesday, the Yankees featured the mother and daughter at their home game against the Angels as part of the organisation’s mission to end hate.

“Bringing light, truth and shedding the stigma as victimized targets of hate will be our goals,” said Liz Kari. “We hope to continue encouraging each other through sharing these personal experiences and letting others know that they are not alone.”

In other news, a renowned violinist has apologizezd for making racist remarks towards Asians.