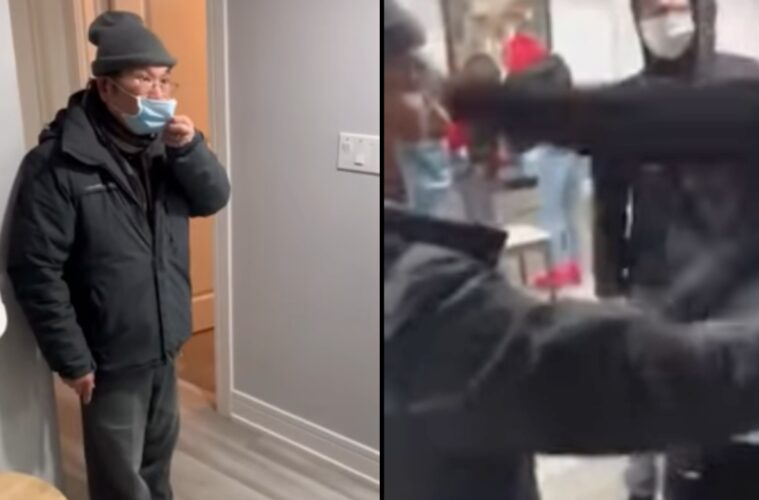 An elderly Asian AirBnb host was slapped in the face by by a group of racist guests in Chicago.

Facebook user Tao Tequilas uploaded footage of the incident in which a group of young people are seen partying in the property. Upon seeing the rowdy group, the AirBnb host wanted to kick the youngsters out after returning their money.

“These kids rented his Airbnb and were being loud and smoking,” Tequilas explained. “The owner wanted to kick them out and they asked for their money back & he gave it back.”

The original uploader of the video, ‘Slick Getem’ captioned the clip “Somebody said Made his ass think abt the cat he put innat Chinese food.”

Standing by the door and observing the group, the bewildered elderly man is belittled by the person taking the video.

In another clip, the host is seen handing the group their money back when one young man violently slaps him across the face.

“These kids are RACISTS and disrespectful for putting their hands on an Asian elderly when he returned their money to them LIKE THEY WANTED!!!” Tequila said in the post.

“The fact that the comment section was full of people laughing and thinking it was funny makes me even more upset and sad. Racism towards Asians has BEEN going on for years and NORMALIZED. We need to speak up and protect our Asian folks more and call out the racists more!”

Comments were less sympathetic towards the beaten host.

“Smacked him like a villain in a Chinese movie 😂 😂 💯 ” commented Mistro DaAviatorz Beatz.

“He finna move the next crew of Panda Express in, [sic]” wrote Jabar White.

In other news, a casting call for upcoming Asian American play Ching Chong Chinaman has drawn controversy for its “racist” title.

The fact that he deleted this but we’re gonna make them viral for the wrong things. Racist and disrespectful as heck….