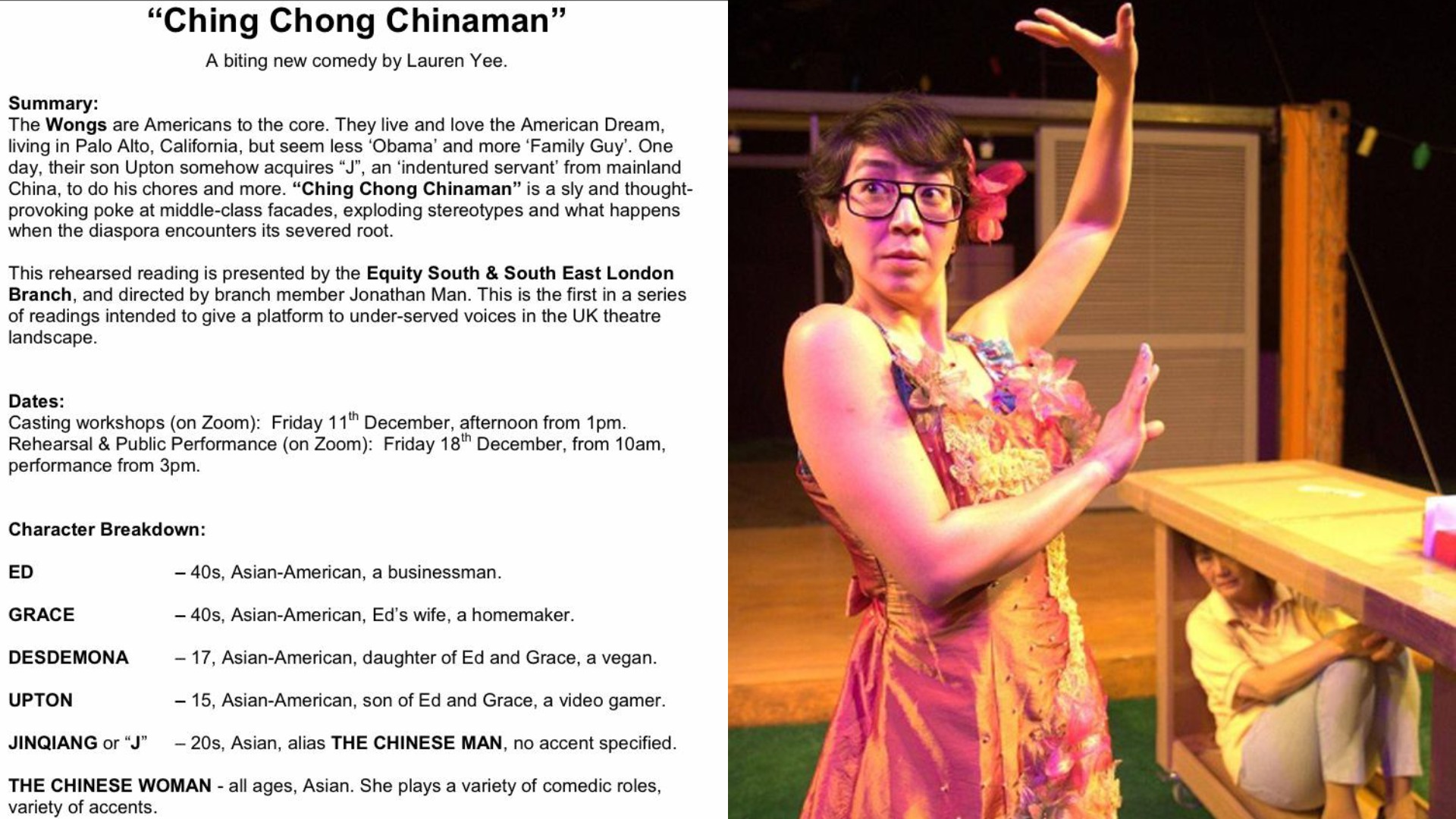 A casting call for upcoming play Ching Chong Chinaman has drawn controversy for its “racist” title.

Attached is a screenshot of the London casting call for the play, which is based on “a biting satirical comedy by Lauren Yee.”

The casting call is searching for five actors to portray Asian American characters. One character has an alias of “The Chinese Man” whilst another is called “The Chinese Woman.”

Yee’s original book was released in 2011 and centres around an Asian American family living the American dream.

“The Wongs are American as apple pie,” the blurb states. “Desdemona dreams of Princeton but could use some help with her calculus. Her brother Upton wants to be a World of Warcraft champion but needs more free time to train. Upton solves both their problems by bringing an indentured servant home one day, but they soon discover that “Ching Chong” has American dreams of his own!”

The casting call describes the play as a “sly and thought-provoking poke at middle-class facades, exploding stereotypes and what happens when the diaspora encounters its severed root.

Social media users slammed the casting call for its racist title. “As much as I love satire, I think it’s worth changing the title,” one commenter wrote. “It’s like calling a show the N word. It won’t fly by.”

“But seeing as racism towards Asian people is so overlooked, our experiences of racism often boils down to what OTHER people think is acceptable or not. It’s as if we are on hold, waiting for people to choose a side; to validate our experiences, feelings and opinions…or not. So please consider changing it.”

“Why would any Asian in their right mind audition for a play which takes its name from a racial slur? This is not satire. This is insulting and ridiculous,” said another.

Meunier defended the play, stating, “It’s a seminal play by Lauren *Yee* , written in 2013, to great acclaim. I’m personally rather confused as to why you didn’t know the play and actually didn’t even bother searching for it? It reminds me of that visitor who once insisted *I* had to change a word on a well known poster in en exhibition about ‘rebellion in theatre’ because she didn’t like a word on it”

“This play was chosen by my director friend, British Asian director Jonathan Man. Who also wrote the casting call,” Meunier added in another comment.

One Facebook user still criticised Meunier for promoting the play. “Just because someone else wrote it and someone else is casting it doesn’t mean you are not just as responsible for use of offensive language if you are promoting it.”

“The content of the play may well be progressive and thought-provoking and worthy of critical acclaim. It may well have been able to make the same point without using offensive language in its title. That’s Lauren Yee’s problem. The problem with this situation is that YOU are choosing to be involved with the promoting this performance and completely refusing to see how YOU are perpetuating the use of racial slurs on the basis of “it’s not my work”. This is how casual racism becomes normalised.”

In other news, a racist joke in Monster Hunter has been cut from all version of the movie.