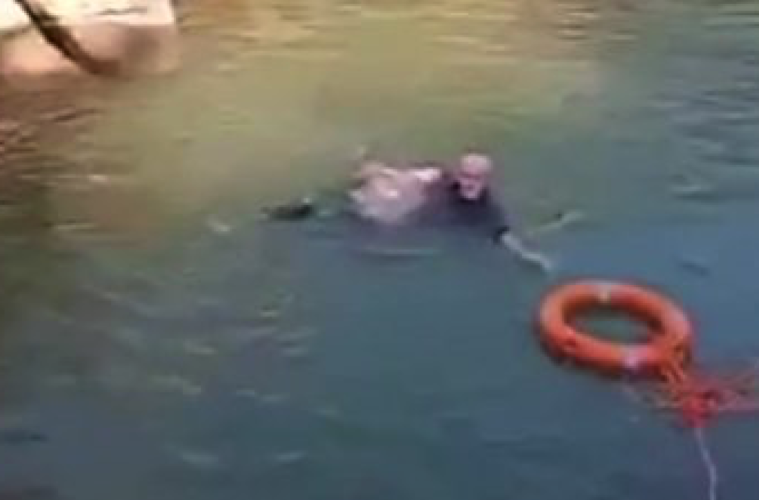 "You'd call such a person a knight in the UK; in China we call him a hero"

BBC reports that a British diplomat has been hailed a “hero” after saving a drowning student in China.

Consul-general in Chongqing, Stephen Ellison, was walking by a river in a village when the woman slipped on the rocks and plunged into the water.

Footage shows the 24-year-old student struggling in the water and disappearing beneath a footbridge before emerging face down and unconscious.

The 61-year-old diplomat removed his shoes and dived into the water to save her.

Ellison lifted the woman and swam back to the riverbank, pulling her with him.

He then kept himself and the woman afloat by holding onto a lifebuoy at the end of a rope that was thrown by onlookers. Eventually, Ellison pulled the woman back on to dry land.

“She was unconscious, she was not breathing and for a short time we feared the worst,” Ellison said. “But as we got back to the side, she started breathing again.”

The unnamed student attends Chongqing University and is from Wuhan. She is recovering slowly from the incident and has invited Ellison to dinner with her family next weekend.

Following the incident, Chinese social media users have described Ellison as a “hero”, “role model” and and someone who is “worthy of admiration.”

“You’d call such a person a knight in the UK; in China we call him a hero,” one Weibo user said.

“For such a big official to go into the water himself to save someone… you’ve got to like this,” another wrote.

In other news, Kpop group BLACKPINK have come under fire for handling a baby panda without gloves.

Elsewhere, Chinese and Korean netizens have clashed about which culture started the Hanbok.