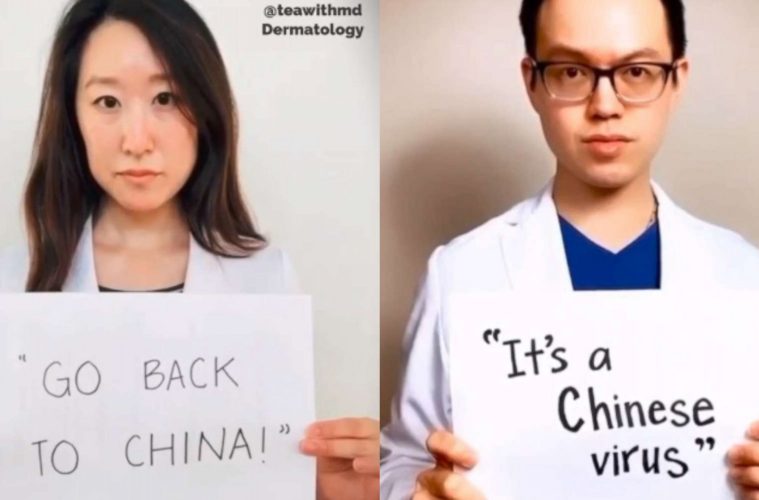 "You're a disgusting, filthy bat-eater!"

GMA reports that Asian American doctors have created a video showing some of the racist Coronavirus remarks they have received.

16 doctors are featured in the viral video which shows each person holding up a sign revealing the remarks that were said to them as well as their responses.

Racist remarks include:
“Go back to China!”
“It’s a Chinese Virus”
“You’re a disgusting, filthy bat-eater!”

Responses from the health workers include:
“I actually enjoy pizza, hamburgers and avocado toast”
“But I’m on the frontlines risking my life to save yours”
“In times of crisis there is no place for hate.

“The topic came up on the recent attack on the subway [and] people having their house vandalized in their community,” Cruz said.

“We were very moved by these reports and we wanted to use our voices.”

Chen added that the video is intended to discourage racism towards Asians.

“We’re hoping that this can spark fundamental changes that will occur behind the mentality of racial discrimination,” she said. “It’s really important that we listen to others, and learn from others.”

Since sharing the video to her Instagram followers, Cruz’s clip has garnered over 25,000 views.

“We wanted to get that idea out there that there’s so much hate, but were still fighting,” Cruz said. “Hate is [also] a virus and we don’t need another virus.”

“As healthcare professionals and physicians we take an oath to do no harm,” Cruz added. “Our patients, we treat them for their medical conditions and we do what we can to save lives. As physicians, we don’t stop. [Regardless of] what your race is, we’ll treat you no matter what.”

Both Cruz and Chen believe that labelling Covid-19 the ‘Chinese Virus’ has worsened discrimination towards Asian Americans.

“The problem with that is it creates a sense that China is the only place to blame,” said Chen. “Ultimately it creates a label. It creates a target to spark finger pointing and ultimately that turns into hate.”

In related news, the NYPD has issued its latest crime report, showing that crimes against Asian Americans were on the rise in April.

The amount of hateful racist attacks against Asians during this pandemic is absolutely unacceptable. Our community has experienced: Physical harassment. Verbal abuse. Vandalism. Shunning. This is so disappointing, you guys. It needs to STOP🛑 There is NO ROOM for hate…ever.⁣ ⁣ We are Asian American. We are physicians. We are on the frontlines. Please watch and listen to our statement above🙏 Love you, fam. Stay safe out there and let’s just spread kindness and positivity, please❤️⁣ ⁣ ⁣ #humanlikeyou#hateisavirus #chinavirus #chinesevirus #coronavirus #covid19 #imnotavirus #asianamerican #racism #xenophobia #Asian #doctors #healthcare #frontliners⁣