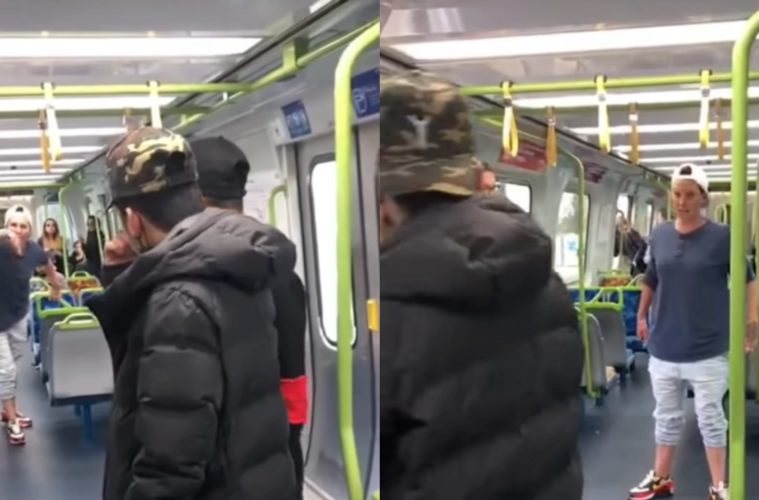 "Fuck off to your own country, Australia is my country, born and bred?"

Daily Mail reports that an Australian mother was seen unleashing a Coronavirus-related racist tirade at a group of Asians.

In the video clip, the mother who was with her daughter at the time, is seen shouting at two Asian men aboard a Melbourne train.

“Maggots!” She shouts at them, “fuck off to your own country you disease-infested dogs!”

“Australia is my country, born and bred,” she continues, stomping her foot. “Where are you from?! You born here?”

“This country,” one Asian man replies.

“You’re not from here, you’re not Australian,” she responds. “You born and bred, cunt?”

Her daughter is seen trying to pull her back, telling her in tears “let’s go.”

A man is also telling the woman to “get off the train.”

Towards the end of the video, the woman is seen grabbing her child roughly by the arm.

Amber, another passenger on the train said she tried to intervene but the woman called her a “German slut,” even though she is British.

“She was sat across the two guys and started pointing at them asking if they had a spare cigarette, to which they said no,” Amber said.

“Honestly, they were so timid these lads,” she said of the Asian men. “They were just normal, keeping themselves to themselves.”

“She got up and started pointing their faces, calling them everything under the sun and making racial slurs,” Amber continued.

“She then leaned forward and flipped one of their caps back,” Amber added. “He obviously reacted, he stood up and shoved her back into her seat and then backed off. She just wanted more and to keep going,” Amber explained.