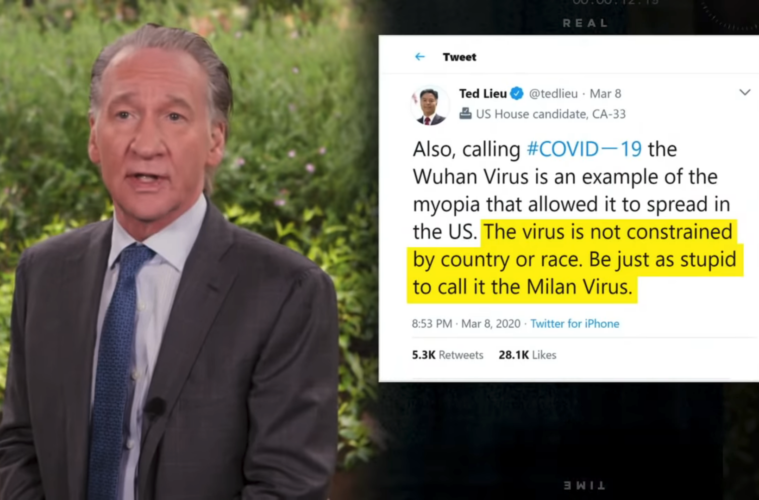 ‘It’s nothing to do with Asian Americans’: Bill Maher defends calling Coronavirus ‘The Chinese Virus’

"Can't we have a pandemic without getting offended?"

In his recent video, titled New Rule: Virus Shaming, Maher said that calling Covid-19 Chinese would be in line with previous disease names.

“Zika is from the Zika forest,” Maher said. “Ebola from the Ebola River. Hantavirus the Hanten River. There’s the West Nile virus and guinea worm and Rocky Mountain spotted fever.”

“And of course the Spanish flu MERS stands for Middle Eastern respiratory syndrome,” he added. “It’s plastered all over airports and no one blogs about it, so why should China get a
pass?”

Maher then slammed Congressman Ted Lieu who tweeted that “the virus is not constrained by country or race. Be just as stupid to call it the Milan Virus.”

Italy was the first country to overtake China in Coronavirus deaths numbers.

In response to Lieu’s tweet, Maher stated, “no that would be way stupider because it didn’t come from Milan and if it did I guarantee we’d be calling it the Milan virus.”

“Jesus-fuckin’-Christ can’t we even have a pandemic without getting offended?” Maher questioned.

The 64-year-old host then criticised those who made a fuss about the virus’s name.

“It scares me that there are people out there who would rather die from the virus than call it by the wrong name,” he added. “The PC police say it’s racist to attack any cultural practice that’s different than our own.”

Maher went on to said that calling the virus “Chinese” is not an attack on Chinese Americans.

“The answer is we should blame China not Chinese Americans but we can’t stop
telling the truth because racists get the wrong idea,” he said “There are always going to
be idiots out there who want to indulge their prejudices but this is an emergency don’t we have bigger tainted fish to fry?”

The term has been mired in controversy after President Trump repeatedly used it amid Coronavirus-related attacks on Asian Americans.

Although Trump has since stated that the virus is “not the fault of Asian Americans”, he  came under fire for repeatedly referring to the virus as “Chinese”.

In related news, a Coronavirus hate tracker has shown that Asian women are being harassed twice as much as men.