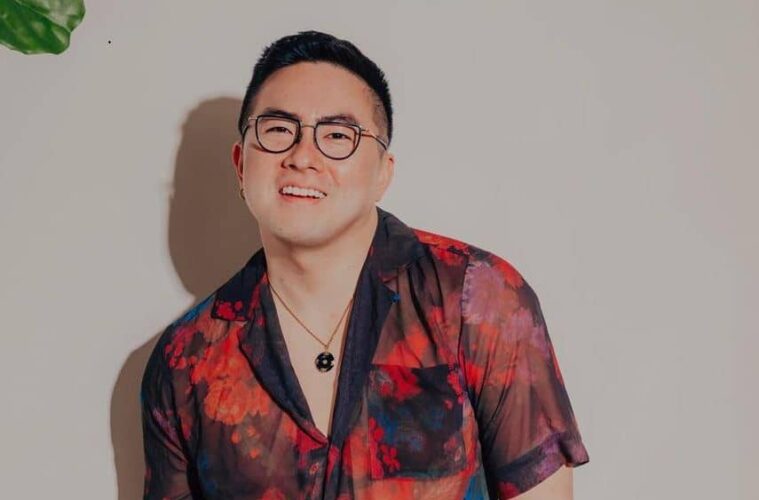 We continue our new feature Praisin’ Asians to honour East Asian figures who have made a difference in 2021. Following on from our first honouree, Simu Liu, Choon Young Tan turns the spotlight onto comedian Bowen Yang.

Born in Brisbane in 1990 to immigrants from mainland China, the Yang family soon moved to Montreal, then Colorado. As a boy Bowen was always interested in comedy and in 2008 his classmates at high school voted him “Most Likely to Be a Cast Member on Saturday Night Live“. In 2019, that prophecy came true. He started off as a writer on the acclaimed show the previous year before being promoted to the main cast. This exciting moment in the show’s history made him the first Chinese-American and third openly gay cast member.

As an out LGBT person of Chinese descent, Bowen’s candid story of having to attend gay conversion therapy as a teenager to appease his parents was both shocking and unsurprising. Shocking that some parents do still want to put their children through it but unsurprising that some feel they must. Yang’s parents’ views came from a “cultural value of masculinity”. However, he eventually stood firm and fought back, and his relationship with his parents has thankfully improved since. When I first read about this it was both sad to know this happened to him but inspiring that he came out on the other side a stronger person.

Since joining SNL, Bowen has appeared in a number of varied and now quite iconic sketches. In some he specifically portrays Asian American or East Asian people. These include playing Kim Jong-un in heavily satirical political sketches, Democratic presidential candidate Andrew Yang, and Chen Biao. “Chen Biao” – a Chinese trade representative – is perhaps his most popular character who has made several appearances, poking fun at US-China relations.

Many of Yang’s sketches and characters are unashamedly gay and camp, which have delighted and humoured audiences. In particular, his “proud gay Oompa Loompa” and “the Iceberg that sank the Titanic” portrayals are fan favourites. His most recent sketch alongside Simu Liu show the pair boasting and battling it out to be “the first Asian”. The hilarious video has already amassed 1.2 million views in just over a week.

Yang’s popularity on the show and his influence in the media, especially this year, has continued to rise. In March he made headlines when he spoke about ways in which people can help tackle the rise in anti-Asian hate crimes. Some of these “suggestions” were tongue-in-cheek and sarcastic, others were on a more serious note. His work has so far earned him two Emmy Award nominations for writing and acting. He also won a Gold Derby TV Award this year and has been nominated for several others. His nomination for an Emmy for Outstanding Supporting Actor in a Comedy Series made him the first featured player and Chinese-American actor to ever make the shortlist.

TIME magazine included Yang on their TIME 100 list of the most influential people in the world. They also featured him in their 2019 list. Sandra Oh – whose acting in Grey’s Anatomy inspired him to be a comedian rather than a doctor – perfectly summed up the reason Bowen Yang is on the list. “As an Asian American performer on such a high-profile show, he’s taken on a stewardship role. But there should be no pressure for him to do anything more than just be himself: quick-witted, hilarious and absurd, with an elegant heart.” He also made it onto People magazine’s annual hotly contended Sexiest Men Alive list.

Yang’s feats have opened up barriers for future East Asian comedians, especially those who identify as LGBTQ. And if anything they have at least continued to diversify the SNL cast. I believe his career in comedy and acting can only keep going up over time.