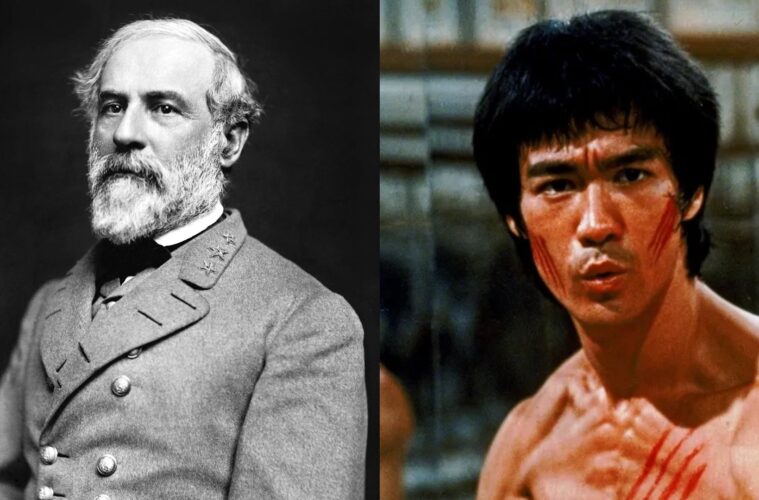 Exit the general, enter the dragon

A petition calling for Lee County to renamed Bruce Lee County has started to gain traction.

Southwest Florida artists Cesar Aguilera and Brian Weaver launched the petition in an effort to pay homage to the martial art film star.

“His achievements are pretty amazing,” Weaver said. “I would be extremely proud to live in Bruce Lee County. And I think it’d be really cool to have a giant statue of Bruce Lee downtown.”

Robert E Lee was regarded as a hero of the South’s ‘Lost Cause’ but his name has since been tarnished due to opposition to African American equality and slave ownership.

In an effort to detach Lee’s name from Florida, Aguilera and Weaver are working under the name Artsemble Underground to garner support for their cause.

“It’s about educating people,” Aguilera says. “I think not many people know the fact that Lee County is named after a slave owner.”

Weaver describes Robert E. Lee as “a man that fought for slavery and killed thousands and thousands of Americans.”

Although Bruce Lee has no connection to Southwest Florida, Robert E Lee did not even step foot in Lee County either.

Lee County was named for Robert E. Lee in 1887 for serving as a general when fighting for the South during the Civil War. Confederate Capt. Francis Hendry had pushed for the county to be named after him.

The artist wanted to retain the name ‘Lee’ to prevent the County from spending money on changing signs and logos.

Bruce Lee was chosen as a replacement for his contributions to American culture.

“He brought two cultures together, made Asian people better respected,” Aguilera says. “Not only in Hollywood, but in general American culture.”

The artist’s petition is currently just shy of its 1,000 signature target.

“It’s time to stop idolizing these Confederate soldiers,” the petition says. “Ending racism includes the removal of racist figures, statues, and idols across the south.

“We propose this petition to rebrand Lee County, Florida, in an effort to continue the battle to eradicate racism in the United States.”

In other news, an American University graduate has been expelled after being arrested for attacking a gay Asian man and his family.