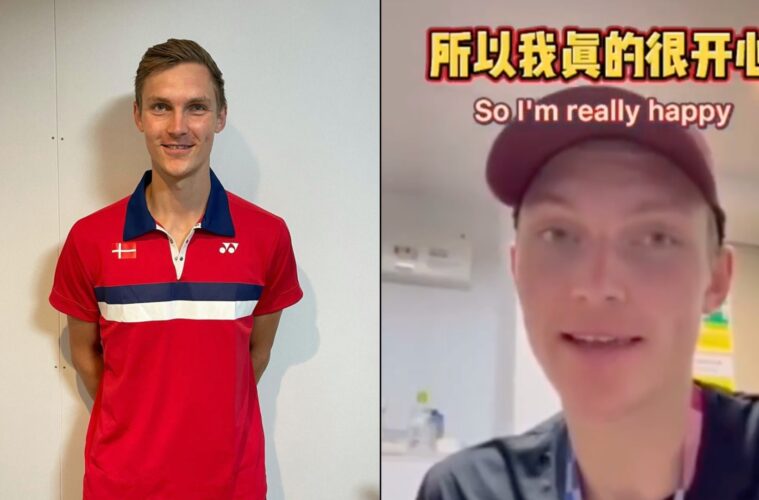 "Since I was little this has been my dream, so I'm really happy"

Danish shuttler Viktor Axelsen may have won an Olympic gold medal but he has also won the hearts of Chinese fans.

As a self-proclaimed fan of Chinese culture, Axelsen hugged his Chinese rival out of respect and sent a message to his fans in Mandarin.

In a clip widely shared on Weibo, the 27-year-old said to his fans in Chinese, “your support meant a lot, thank you very much. Winning at the Olympics is truly a dream come true.”

“Since I was little this has been my dream, so I’m really happy. I couldn’t even sleep last night, I kept wondering ‘wow this is too special’. This outcome to me is remarkable.”

“I’m looking forward to celebrate this moment in Denmark with my family to savour this victory. I’ll keep pushing myself. Thank you for your support.”

Fans on Weibo expressed their support for the Dane.

“Congrats! Over these many years, we have seen you make progress step by step! You are China’s best competitor, also China’s good friend! Keep fighting!” wrote one netizen on Weibo.

Axelson has his own channels on Douin and Bilibili to interact with his Chinese fans and uses the name “An Sai Long”. “An” sounds like Axelsen’s family name whilst “Long” means dragon in Chinese, spurring fans to don the name “double dragon competition” for his final with Chen Long.

“I chose ‘long’ because my Chinese teacher told me that dragon is a totem that symbolizes the Chinese spirit, and a man should be like a dragon, so I named myself An Sai Long,” Axelsen once told media.

In other Olympics news, Korean archery gold medalist An San has received support following online abuse over her short hair.

Viktor Axelsen thanked his fans in Mandarin. He has many Chinese fans. pic.twitter.com/cFiskiIYhL