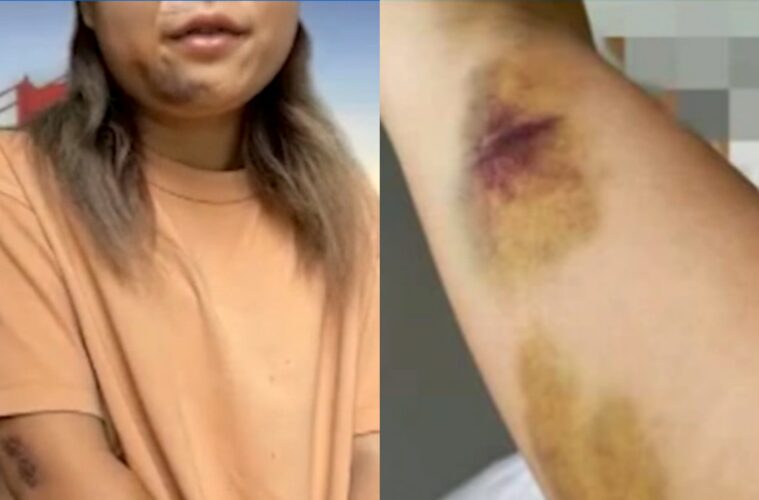 Asian American woman attacked, robbed, dragged and bitten whilst on a run in San Francisco

An Asian American woman has been attacked while out for a run in San Francisco.

The victim, who only wishes to be identified as ‘V’, was out running on Sunday night in Pacific Heights – an area she had always deemed to be safe.

A young man jumped out of a car and grabbed her cell phone. She was then dragged into the car, which had three other young people in it.

V was dragged for half a block. One person bit her hand and stole her Apple watch. She suffered bruises on her face arms and legs, as well as a bite mark.

Fortunately witnesses called the police who arrived in minutes. V wants to thank those who helped and wishes to share her story in the hope her attackers will be caught.

“I’m not safe in Pacific Heights I don’t know where I can be safe at to be honest,” V said. She has lived in San Francisco for almost a decade.

“I wish they can be safe because I’m not the only Asian female hang out by myself in the neighborhood.”

“There are consequences to do this thing.”

SFPD are investigating the incident.

In other news, senior Asian Americans are learning self-defense in response to the rise in attacks against elderly Asians.

This woman was attacked for her iPhone, her hand closed in a car window, dragged for half a block & 2-/ bitten by 1 of her assailants in Pacific Heights

I spoke the woman who wants to be identified only as “V” (1/4) #aapi
⠀ pic.twitter.com/ONLzEw64Ej

She was running Sunday night & was crossing California & Fillmore when suddenly 1 or 4 teens got out of a car & grabbed her cell.

When they saw her watch she was grabbed & pulled into the car & window shut on her hand.

She says 1 bit her & pushed her out. #SanFrancisco pic.twitter.com/GfLEekKCz3