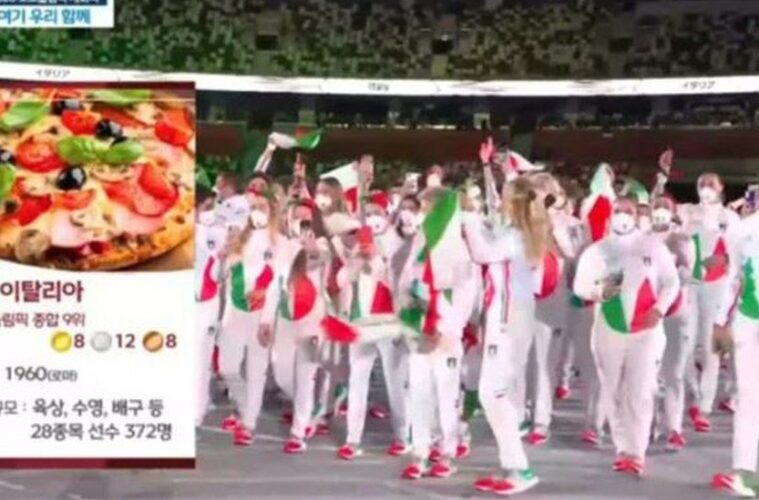 Dracula for Romania, Chernobyl for Ukraine and salmon for Norway

A South Korea broadcaster has apologized for using pizza to depict Italy at the Tokyo 2020 Olympics.

Broadcaster MBC used images of pizza to describe Italy as the athletes entered the stadium during the opening ceremony.

Dracula was also used for Romania, Chernobyl used for Ukraine and a piece of salmon for Norway. Additionally, on-screen captions for Haiti said it was a country “with an unstable political situation due to the assassination of the president”.

When the Syrian team entered, a caption read, “a civil war that has been going on for 10 years.”

After a flurry of backlash online, MBC issued an apology stating, “inappropriate images and captions were used to introduce some stories. We apologised to those countries including Ukraine and our viewers”.

The channel added that it wanted to make it easier for their viewers to understand the countries, but has since said it was an “inexcusable mistake”.

MBC CEO Park Sung-jae apologised in a press conference on Monday, saying the channel had “damaged the Olympic values of friendship, solidarity and harmony”.

“I bow my head and deeply apologise,” he said, adding that MBC would be putting “in all [their] effort to prevent another accident from happening”.

At the 2008 Beijing Olympics, MBC was fined for referring to Zimbabwe “as a country with deadly inflation.”

In other sports news, Korean American transgender athlete Schuyler Bailar has discussed the challenges he faces as a professional sportsperson.