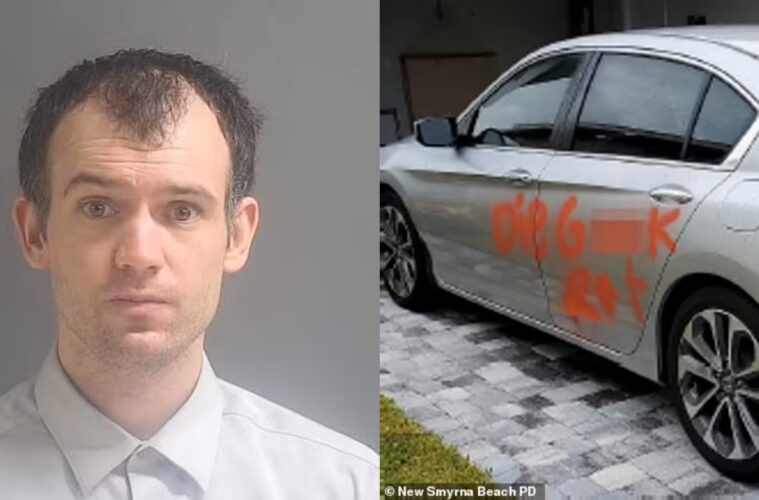 "You have effectively terrorized a family is what you did"

A Florida man has been arrested for targeting an Asian family.

Hiding behind a profile with a squirrel photo and under the name ‘Pine Cone’, Christiansen targeted the wife of the family saying she and her husband should die from rat poisoning.

In May and September 2020, messages were sent to the Bureau of Immigration in the Philippines from ‘Pine Cone’, warning of a plan to stab the first Filipino he saw in revenge to how his brother was treated during a visit to the Philippines.

Both dentists, the victims said that Christiansen was a patient and had been to the wife’s office to have his teeth cleaned a day before sending the abusive messages.

“He kept on saying this office isn’t what it seems and he would never expand on that and so that was that,” the wife said, suspecting he was expecting a white dentist.

Towards the end of the month, racist slurs including “die Gook Rat” and “Gook Retard Rat” were spray painted on the side of the family’s cars.

Nails were also placed on their driveway.

“We shouldn’t have to live with that,” the wife said. “We were in fear of our lives. We should just be treating our patients. But we had to make sure that the door was locked and each patient that came to the door had to be confirmed that it was a patient that was scheduled for an appointment.”

“It just made us terrified and at that time I was six months, almost seven months, pregnant. It made me more helpless,” she added.

“I thought the worst – that someone was trying to kill us,” the husband testified. ‘It really worried me for my family’s safety.’

“What happens when he is out?” he said. “What’s going to stop him from going further? That is my biggest fear.'”

Christiansen was convicted of two counts of criminal mischief with hate crime enhancements, second-degree felonies that are punishable by up to 15 years in prison each.

However he only faces one year in jail and three years of house arrest, followed by seven years probation due to his clean criminal record.

“You have effectively terrorized a family is what you did,” Circuit Judge Dennis Craig told Christiansen during sentencing Tuesday.

“Probably without even taking that into consideration, you just needed to act out on your hatred and on your prejudice.”

Christiansen’s defence claimed he had mental health issues. His father showed a letter to the judge saying he had been under psychiatric treatment since age 5 for various disorders, including psychotic disorder, and had been prescribed at least 32 different medicines.

Christiansen simply responded, “I swear. I promise. I will never do anything like that ever again. I promise,” he told the judge.

In other news, California is investing $156 million to fight against anti-Asian hate.