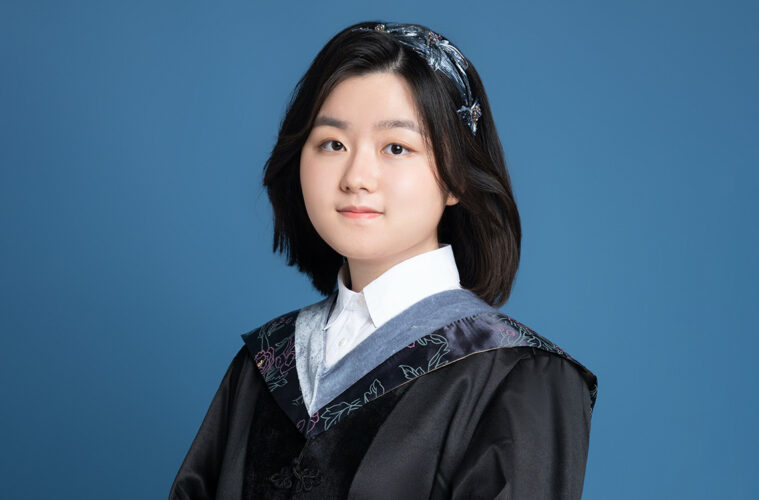 A 16-year-old student has graduated from the University of Toronto.

Vivian (Qiao) Xie is the youngest to graduate from U of T’s Faculty of Arts & Science, U of T Scarborough or U of T Mississauga since at least 1979 – the year the college began tracking such data.

The Innis College student hopes to finish her PhD by the age of 22 when regular students are preparing to finish their undergraduate degrees.

Xie had skipped several grades in elementary and middle school and completed Grade 10 over a summer. At age 12, she began her first year of undergraduate studies at the University of Prince Edward Island before transferring to U of T.

The diligent student said her family did not pressure her in her studies but credits her grandmother for inspiring her when she was a young child in Shanghai.

“She would teach me as I was playing – that’s where I got my curiosity and enjoyment of learning from,” Xie said of her grandmother who was a teacher. “Younger me was very much into school because, for me, it was really about learning and I didn’t care about grades.

“My grandmother Pavlov-ed me into associating learning with fun.”

Aside from studying, Xie has a close group of friends and “more hobbies than I have time for,” such as art, creative writing, piano and playing Minecraft.

“The only thing that I maybe missed out on is the nightlife, but I’m not much of a party person anyway so I don’t think I’m missing out on too much,” she says. “The rest of my social life – the more daytime variety – has been very normal.”

Xie recalled how she was allowed to skip Grade 3 easily but when she wanted to jump to Grade 6 part way through Grade 5, no school in the province would allow it.

“I said ‘I’m not going to go to school if you’re not going to let me skip this grade.’ I was a stubborn child.”

Xie’s parents eventually found a school in Halifax that would allow their daughter to enrol in Grade 6 after calling “literally every school in Canada.”

“Either my communication wasn’t clear because I was a child, or maybe it was my mother’s broken English, or maybe they just thought it was a good idea,” Xie says.

Xie then finished Grade 8 and 9 before completing Grade 10 over a summer. She completed Grades 11 and 12 in full.

“If anything, my mother would have probably lost less hair and had fewer headaches if it wasn’t for my shenanigans,” she said.

“From such a young age, students are trained to think of grades as the thing that measures your self-worth, and so many people judge you by it,” she says. “Part of the reason I skipped grades in the first place was because I noticed that learning would become progressively less fun if I fell into this rat race.”

“It doesn’t phase me if you throw me 10 essays for one course as long as I enjoy it. But if you give me one essay for one really boring course, I’d do very poorly on that.”

Xie is now interested in setting up a business importing pet goods from China.

“The biggest reason for that is my own experience – all the grade-skipping that I did and all the experiences I had with the school system, grades and not encouraging kids to be curious and learn,” she says. “Because they are our next generation. What are we doing if we’re not fostering their interest in the subjects?”

In other news, a renowned violinist has apologized for making racist remarks towards Asians.