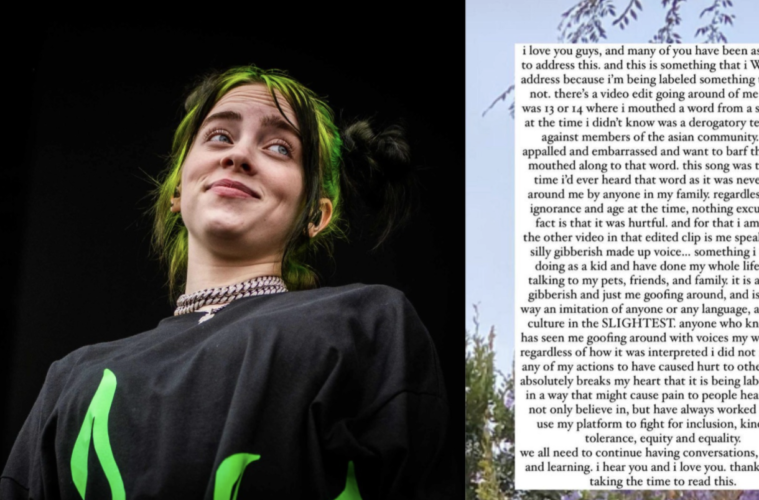 "We all need to continue having conversations, listening and learning"

Billie Eilish has apologized for using a racist anti-Asian slur.

Last week, it was reported that Eilish had come under fire for a clip in which the singer is allegedly heard saying the word “chink” and mocking Asian languages.

In the TikTok video compilation, Eilish is seen singing parts of different songs with the caption if u can name every song in this i will pay u.”

Eilish appears to say “chink” in one clip.

The Grammy-winning singer has since issued an apology via her Instagram story, saying she was “appalled and embarrassed” by the clip.

In her apology, Eilish said she was “13 or 14” and did not know at the time that the word was a racial slur.

“I am appalled and embarrassed and want to barf that I ever mouthed along to that word,” she wrote. “This song was the only time I’d ever heard that word as it was never used around me by anyone in my family.”

“Regardless of my ignorance and age at the time, nothing excuses the fact is that it was hurtful. And for that I am sorry.”

“I love you guys, and many of you have been asking me to address this. And this is something I want to address because I’m being labelled something that I am not,” she continued.

Referring to the accusations of mocking Asian accents, Eilish said she was just speaking in a “silly gibberish made up voice”, something she’s done since she was a child.

“It is absolute gibberish and just me goofing around, and is in no way an imitation of anyone or any language, accent, or culture in the slightest,” she added.

“I not only believe in, but have always worked hard to use my platform to fight for inclusion, kindness, tolerance, equity and equality.

“We all need to continue having conversations, listening and learning.”

In other news, Asian LPGA players have broken their silence on racism on sexism.