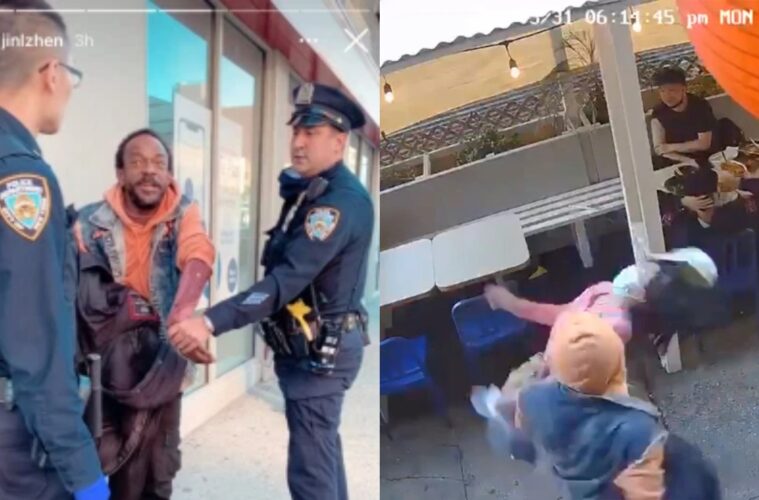 An Asian woman was randomly hit in the face by a man in New York City.

The incident occurred outside a Chinatown restaurant on Monday.

CCTV footage shows the 55-year-old victim walking past Kong Sihk Tong café around 6:15 pm when a man swings at her face.

The woman is seen falling backwards onto the pavement as the attacker, who is dressed in an orange hoodie and denim jacket, begins shouting at bystanders.

A man reportedly rushed over to the victim, who appeared unconscious. He asked her if she was OK but the woman did not respond.

Restaurant workers chased the attacker and witnesses flagged down police to lead them to the suspect.

“When I saw the lady rolled over to the ground and went unconscious I quickly hung up on my food order and started recording the situation for evidence,” witness Jin Zhen said.

“Can’t believe I actually witnessed an attack on an Asian lady right in front of me at the heart of NYC Chinatown.”

Zhen was able to flag down police and thanked restaurant workers for helping.

Chiu Cheng, a 24-year-old waiter, said the restaurant was busy at the time.

In similar news, a 75-year-old Asian woman has been punched in the face in Queens.

This was just sent to me from my constituent. This just happened in my district in Chinatown. He has been arrested and our precinct is investigating. pic.twitter.com/sxNfCbrlza