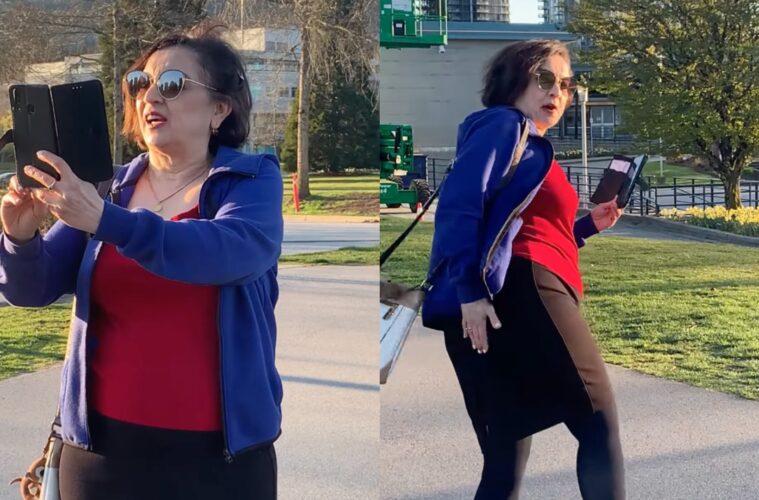 ‘It came from your country’: Woman in Vancouver caught spewing anti-Asian racist hate

"‘This COVID is all because of you. You need to go back to China."

A woman in Vancouver was caught on camera spewing anti-Asian racist hate.

Gina Chong and her friend Tiffany Tong were walking through Lafarge Lake Park in Coquitlam when the incident occurred.

The woman had asked the pair to take a picture for her. When Chong and Tong declined due to Coronavirus measures, the woman turned nasty.

“This COVID is all because of you,” she said. “You need to go back to China. It came from your country.”

Chong then began recording the woman. “We asked her if she could repeat that [on camera], and obviously she didn’t want to,” Chong said. “But she made some rude remarks. She said again, ‘it came from your country.’”

“One lady on the bench just kind of called out to her, ‘don’t be racist. We all bleed the same.’ And so it was nice to see that there was someone that was speaking out for us,” said Chong.

But she added that “in that situation, it would have been nice if more people spoke up.”

Chong said she had experienced racism growing up but not as an adult.

“I have experienced a little bit of racism, here and there, when I was a lot younger,” she said. “But nothing since. So, this definitely came out of nowhere, and it was completely unexpected.”

Chong said Asians in the west are “always told to stay silent, not to speak out and not to stir the pot.”

“I think this has to change,” she said.

“I wanted to use this opportunity to speak out for the youth and for the seniors who don’t feel like they have a voice.

“I have two young daughters. I want them to speak out for themselves and also to defend others. And I really do hope anyone that witnesses … something like this speak up as well.”

Earlier this month, a racist man hospitalised an Asian man in Toronto.