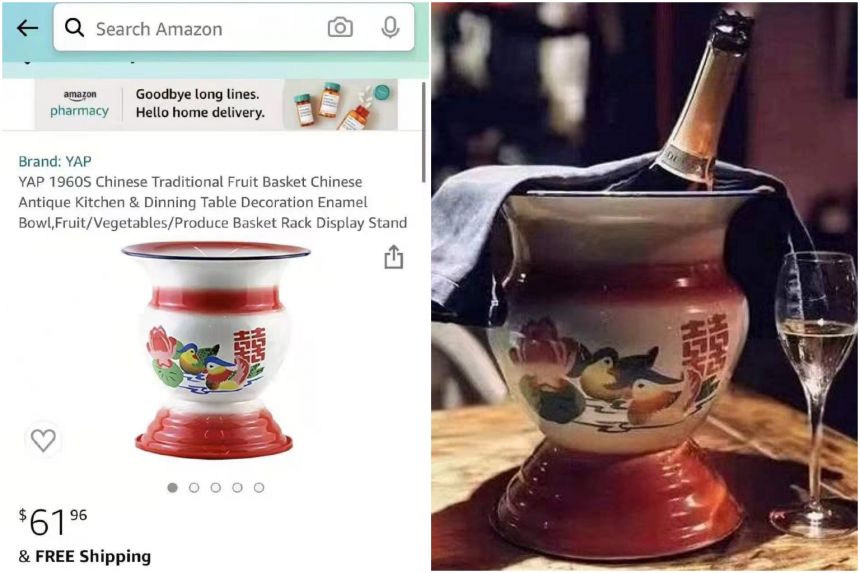 "Symbolises the happiness of life"

A traditional Chinese spitting pot is being sold on Amazon as a fruit basket.

The Chinese spittoon was commonly used in households as a mobile toilet for people to defecate or spit into.

Taobao sells similar items for just 28 yuan, which is just under C$6.

Images of the ‘fruit basket’ show an image of two ducks and the Chinese characters for “double happiness”. Its description says the Chinese antique can be used for holding fruit or as a decorative stand.

Other recommended uses include it being a gift for housewarmings and weddings. One image showed the vase chilling a bottle of champagne.

The Chinese fruit basket features “beautiful colours and patterns” that represent “traditional Chinese culture” and “symbolise the happiness of life”.

Social media users were quick to express their bewilderment.

“US$60? I can’t believe my childhood potty is more valuable than I am,” one Internet user remarked.

“I hope no one from other countries ever buys this ‘basket’ and sends it as a gift to their Chinese friends because no Chinese people would feel happy if they see a delicately packed spittoon with fruits in it,” another said.

“It is actually interesting to see how things can be used differently in other cultures. As long as the buyers like it, it shouldn’t matter it is ‘originally’ used for,” said another.

In other news, Tieghan Gerard, the author of recipe site Half Baked Harvest, has come under fire for whitewashing Vietnamese pho.