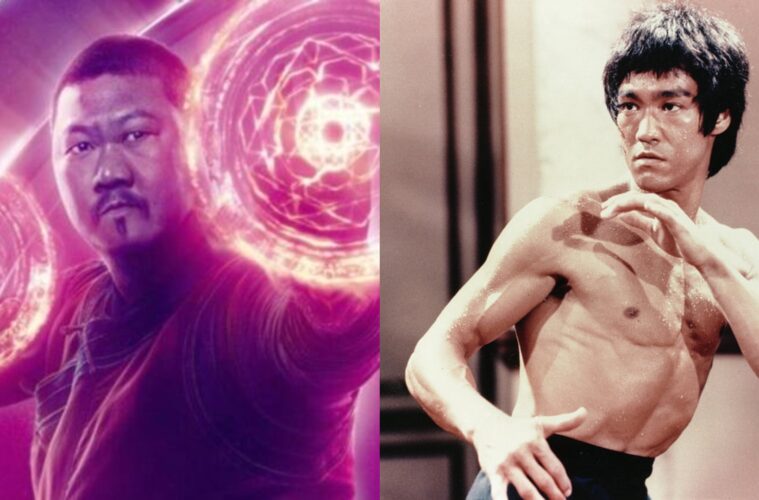 "Be water, my friend"

Doctor Strange star Benedict Wong has celebrated what would be Bruce Lee‘s 80th birthday on 27 November.

In a guest column for The Hollywood Reporter, the British actor revealed what the martial arts star meant to him growing up as British Chinese.

Wong recalled how he thought he saw a “Chinese man on the TV” in the 70’s who later turned out to be Benny Hill. However, when Wong saw Lee on the screen, he finally had hope for his generation.

“Then, one day, [Lee] arrived on my screen, a symbol of East Asian strength ,” Wong wrote. “A symbol of hope as a first-generation, Britain-born Chinese growing up in Salford. Bruce Lee has been with me in many different forms through my years, and resonated in different ways.”

The 49-year-old actor explained that Enter The Dragon was the first of Lee’s film he saw and to date is still one of his favourites. “70s cool at its best, and one of the few films where we actually hear him talk rather than being dubbed,” Wong said of the film.

Immensely inspired by Lee, Wong read his book Tao Of Jeet Kune Do, which Wong said played an “intrinsic part” in guiding him through his career.

“Tao of Jeet Kune Do is more than just a book, it’s a philosophical guide that I would highly recommend to all young actors starting out,” Wong said. “In the book, Bruce Lee gleaned off all martial arts, using all styles, constantly evolving, discarding, learning and adjusting, becoming better and moving forward; “Because of styles people are separated. Research your own experience, absorb what is useful, reject what is useless, add what is essentially your own.””

Wong said he continues to apply the lessons learnt from the book to his acting methods.

“I’ve tried to incorporate this philosophy into my acting style,” he said. “Starting out 30 years ago I simply didn’t have the means to go to drama school, so I’ve taken an unusual path. It’s been about the alchemy of bringing your own version and style.”

“Welcoming all forms and accepting that others around you are doing the same. Learning from others what is, and isn’t, right for you, discarding what no longer serves you, and moving forward.”

Wong also highlighted his favourite quote from the book: “If you always put limits on everything you do, physical or anything else, it will spread into your work and into your life. There are no limits. There are only plateaus, and you must not stay there, you must go beyond them.”

The Avengers star explained that the quote is “particularly helpful when I’ve hit one of the inevitable plateaus, to help work myself through it, as well as when I’ve come up against limitations. Particularly earlier on in my career, there were constant limitations; patterns forming, being boxed in, stereotypes, some I couldn’t wriggle out of.”

“I tried to understand who and where those limitations were coming from, and over time I’m learning to challenge them. Using the previous quote of rejecting what is useless, closing the door on what I see as limitations and trying to break myself free of them.”

In other news, MasterChef: The Professionals contestant Philli Armitage-Mattin has come under fire for describing Asian food as “dirty”.