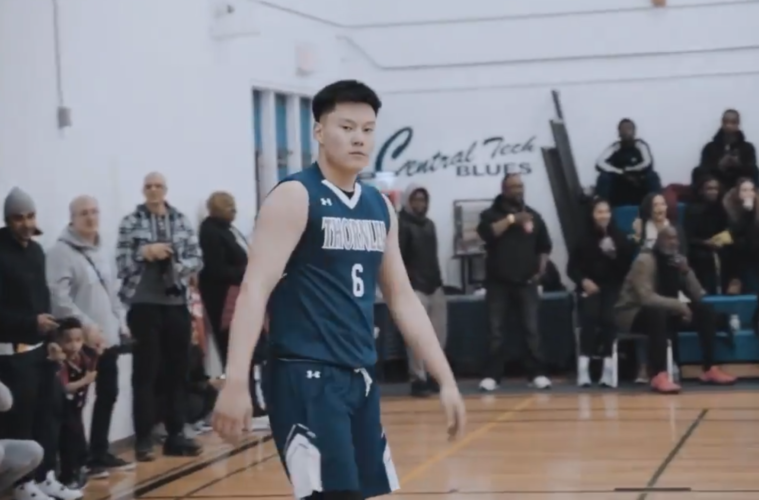 "From the players it’d be all comparisons to any Asian thing – soy sauce, Jackie Chan, Yao Ming, small eyes"

Talking to SCMP, the 19-year-old said he has already heard “all the names” whilst playing basketball.

“I’ve heard all the names right when I step onto the court. From the players it’d be all comparisons to any Asian thing – soy sauce, Jackie Chan, Yao Ming, small eyes,” Li said. “Like I’d be shooting free throws and another team would be standing right there saying ‘can you even see the rim?’ and all that.”

Touted as the ‘Chinese Zion Williamson’, Li has fought against stereotypes and made history by becoming the first ethnic-Chinese player to make the All-Canadian game last year. Li now has his sight set on the Canadian NCAA and ultimately the NBA.

Li credited Jeremy Lin for helping him through the process after featuring alongside him on a Chinese basketball TV show in 2019.

“I definitely want to shout out Jeremy Lin,” Li said. “This year, he gave me his number and offered me an outlet to ask questions if I’m struggling or need any advice. I look up to him like a bigger bro. That’s kind of surreal to me because he was my role model.”

“When I first met him, I told him I was just trying to get scholarships and play division one basketball so my parents wouldn’t need to pay a cent for me at university. I think that’s where it kicked off because he could relate to me and had to go through a lot of things. He’s even been kind enough to offer to get a workout in together. That’s surreal. That person you watched, that got you into the sport I’m in now. Now I can just to talk to him. It’s just crazy.”

Li went on to say that anti-Asian racism is prevalent in basketball due to the lack of Asian representation in the sport.

“From my very first organised basketball team to now, I‘ve seen very few Asians or Asian-Americans playing at the top level,” Li said. “Most of the time they’ll be sitting on the bench or being managers. When people saw me on the floor playing, no one really expected me to do anything. I always felt like that guy who everybody could pick on because no one really looked on me to do anything.

“I was always tall from a young age, probably six-feet-two before high school. I was definitely pretty chubby growing up and I think it was a lot easier to turn fat into muscle than turning skin and bones into muscle mass. By ninth grade, I could still barely even touch the backboard but I started to eat right and keep healthy. That’s when my athleticism started growing.”

“I do this for the younger generation looking for knowledge from anyone in my situation,” he said. “They’ll read this as the next Asian guy who wants to play division one basketball. My goal on top of playing in the NBA and the national team is to inspire the next generation of Asians to break out of their comfort zones.”

“I feel like there’s a stigma that we’re less than other people in a sport just because of the colour of our skin – and I think that’s kind of bulls***. If you just put in the work and screw what other people think, you can go wherever you want to go in your sport. I don’t want other people thinking they can’t get past something if they’re Asian.”

In other news, Korean American Younghoe Koo has become the NFL’s top scorer this season.