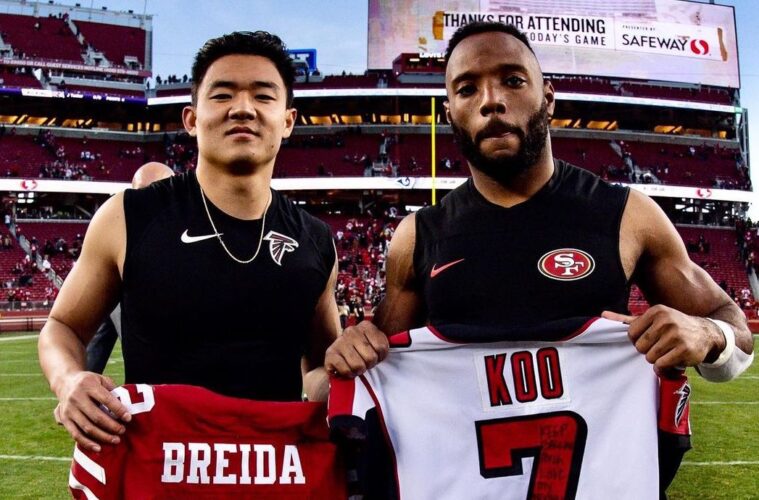 The Korean American has scored 10.9 points per game this season

Younghoe Koo has become the NFL’s top scorer this season.

According to CBS, the Atlanta Falcons placekicker leads all kickers in scoring with 10.9 points per game this season.

Additionally, the Korean American has compiled 1.8 more points per game than any other NFL kicker with a minimum of three appearances his year.

NFL.com adds that Koo is one of four Korean-Americans to ever play in the NFL.

Koo and his family immigrated to Ridgewood, New Jersey, when the aspiring sports star was 12 years old. In Seoul, Koo had won a soccer kicking competition and then discovered he could kick an oblong ball when he arrived in America.

“During a lunch break, kids were playing two-hand-touch football,” Koo told The Bill Simmons Podcast in 2017. “They said, ‘Punt it,’ because they knew I played soccer. And they saw me punt the ball and they were like, ‘Oh man. Look at this kid! You should come out and play football with us.’ And that’s how I signed up for football.”

Koo used football to learn English and make friends and his father supported him to pursue the sport.

“My middle school coach, my teammate’s dad, came to my house and told my dad, ‘He has a future in [football],'” Koo told Simmons. “Because my dad looked at it like I was just kicking a football. But my middle school explained to my dad, ‘You can get a scholarship and you can have a future in this.'”

He went on to sign as an undrafted free agent with the Los Angeles Chargers in 2017 before moving from the Alliance of American Football’s Atlanta Legends to the Patriots practice squad.

Last season, Koo earned a place on the Falcons’ roster.

In other news, Major League Baseball (MLB) has hired its first ever Asian and female General Manager.