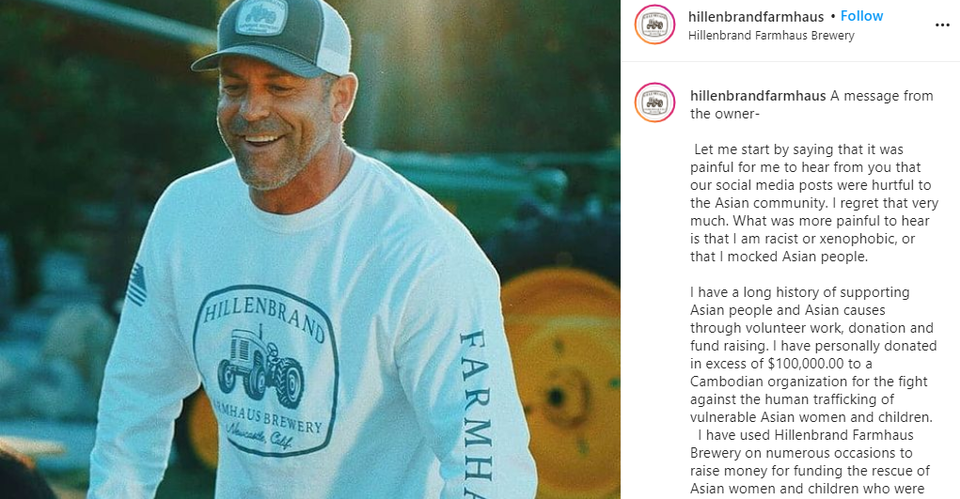 "It is extremely unfair to say it is racist"

The Sacramento Bee reports that a brewery in Placer County has apologized for their ‘Chinese Virus Special’ promotion but has denied it was racist.

Hillenbrand Farmhaus Brewery’s prmotion offered a gift card deal with a complimentary 32-ounce crowler with purchase of a $50 or $100 card.

The ‘Chinese Virus Special’ was later renamed the ‘Donald Trump Special’ before being called the ‘Christmas Special’.

“Let me start by saying that it was painful for me to hear from you that our social media posts were hurtful to the Asian community,” he stated.

“I regret that very much What was more painful to hear is that I am racist or xenophobic, or that I mocked Asian people.”

The owner added that he “personally donated in excess of $100,000 to a Cambodian organization for the fight against the human trafficking of vulnerable Asian women and children.

“It is fair to say that my comment was ignorant, but extremely unfair to say it is racist,” he added.

“Racism should be measured by more than a poorly worded social post. Racism is not words. It is thoughts and beliefs. Against the accusation of racism, my actions speak louder than words.”

“I will offer my sincere apology to the Asian community for my ignorance, but I will neither dignify nor validate the accusations of racism with anything more.”

Hillenbrand Brewery’s Facebook page has since been deleted and comments have been deactivated on its Instagram page.

In other news, a sushi restaurant in Sacramento has been targeted with racist anti-Asian vandalism.