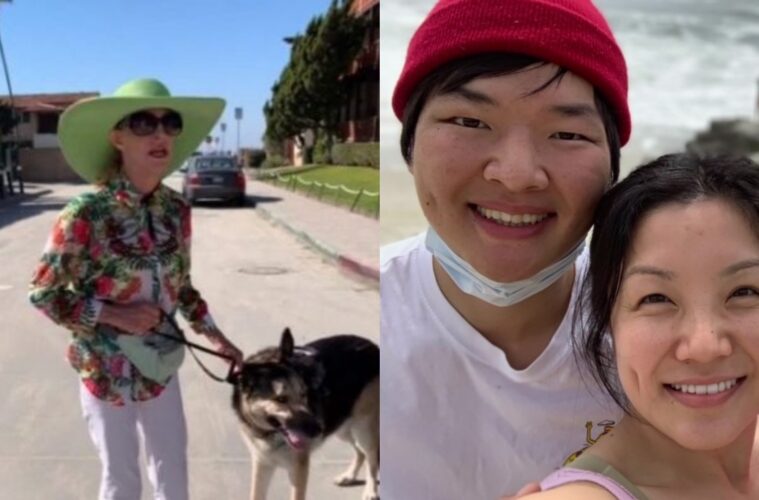 “You think being beheaded is funny?"

A racist woman was caught on camera harassing an Asian family in San Diego.

Jane Woo and her husband were walking with their 1-year-old daughter down Avenida de la Playa towards the beach when the incident occurred.

A woman who was walking her dog approached Woo’s husband and said, “why do Muslims behead white people and not Chinese people?”, which can be heard in the clip.

Woo’s husband told his wife to ignore the woman, which only proved to anger the woman.

“I think that’s what set her off because she started asking repeatedly and didn’t let us move through, and she didn’t have a mask on, either,” Woo recalled.

“We were just kind of like stunned and laughing because it was so ridiculous,” Woo added.

In the clip, the woman responds to Woo’s laughing by saying, “You think being beheaded is funny? You think murder based on race and ethnicity is funny?”

“No, I think you’re coming up to me very closely,” Woo replies.

“I think that’s called a crime on humanity!” The woman responds.

“Are you assuming I’m Chinese based off looking at my skin color and my hair? Do you not know I’m Korean-American?” Woo asked the woman.

Speaking to NBC, Woo said “She made a direct target toward my husband, who also has black hair and looks very distinctly Asian, and to assume that all Muslims, that in itself is also hateful rhetoric, right? It was just very ignorant.”

“You know, immigrant story of just starting off with nothing and really just building a life, and that’s the beauty of America,” Woo said.

“That what makes this place a hope-filled place, and I feel like we’ve lost a sense of that.”

“That memory is seared into my memory forever, but I hope you know what I’m not here to make your life more uncomfortable…I’m simply here to live a life in a country that has provided me and my family so much and to give back to it.”

In other news, a racist anti-masker was caught on camera threatening to sue a Thai restaurant in NYC for refusing him service.