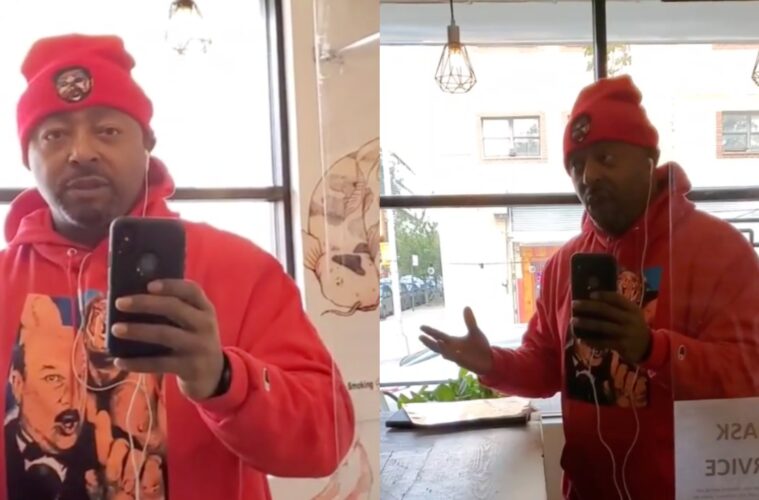 "You think you belong here you fucking bitch?"

A racist anti-masker was caught on camera threatening to sue a Thai restaurant in NYC for refusing him service.

The incident occurred in Maple Thai Eatery in Astoria, Queens. Kathaleeya, the daughter of the restaurant’s owner, uploaded the clip to Instagram.

“This guy was harassing me at my family’s restaurant today. He had no mask on and made a poor false statement about not wearing a mask. I am begging you to share this,” she wrote in the caption.

In the clip, the man is seen filming the restaurant staff saying, “I’m an American with a disability, I can’t wear a mask. You can’t deny me service if I don’t wear a mask.”

“I don’t care who you call, you can call the FBI,” the man replies. “The police don’t enforce policy, they enforce law.”

He then 180’s and says he would wear a mask. “I can’t wear a mask but I’d still wear a mask to appease everyone because we’re in America.”

“I’m a veteran with a disability,” he then says. “I would love for you to call the police so I can show them my information.”

“Can you leave please?” Kathaleeya asks.

“I am leaving, I just want my evidence when I contact my civil rights attorney,” the man says before turning to another member of staff, asking, “are you the manager sir? And you said you won’t serve me because I won’t wear a mask?”

“I’m an American with a disability and you can’t compel me to wear a mask. You can ask me to but you can’t make me because I have a respiratory problem and I can’t wear masks. You can’t deny me service.”

“Fuck you, you don’t know what’s bullshit about my health!” The man aggressively shouts.

“If i came in here with a dog and I was blind, you can’t tell me I can’t bring my dog in here. It’s called the Americans with Disabilities Act. She’s an ignorant ass bitch,” the man declares.

“This is what the Centre for Disease Control gave me, I have a face-mask exemption,” he says, showing his phone to the staff. “I would love for her to call the police and I’m going to sue all y’all for discrimination.”

The man then turns racist, exclaiming, “fuck you you fucking foreigner bitch! Suck my dick! You think you belong here you fucking bitch?”

In recent news, a driver was caught on camera hurling racist slurs at an Asian man in Los Angeles.

****please share this**** this guy was harassing me at my family's restaurant today. He had no mask on and made a poor false statement about not wearing a mask. I am begging you to share this. Thank you🙏11/03/20 #newyorkcity #antimask #asian #covid_19 #karen #racist