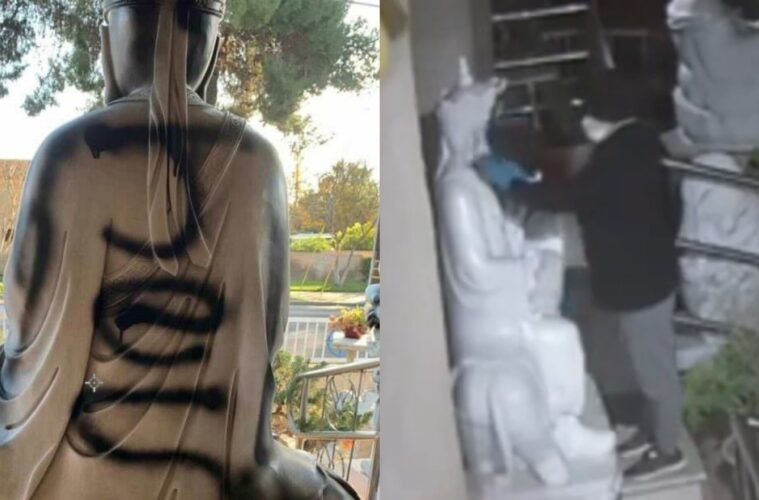 “What their motive is and why they would pick on them, I don’t know"

Police are searching for two women after six Buddhist temples were vandalized in Los Angeles.

The women were caught on CCTV cameras spraying statues in the courtyard of Huong Tich Temple at 4821 W. Fifth St in Santa Ana.

Timestamps on the video footage show the incident occurred at 11 pm on Monday.

15 stone Buddha and Bodhisattva statues were graffitied with black spray paint. “Jesus” was sprayed on the spine of one statue.

The culprits are seen in the footage wearing dark clothing. One is wearing a blue Patriots beanie and the other a dark beanie.

Huong Tich Temple was the sixth temple to be vandalized in the area in the last month.

Thai Viet Phan, who was recently elected to the Santa Ana City Council, said “It’s beyond trespass. It’s beyond vandalism. It’s a hate crime targeted at the Vietnamese American Buddhist community, and we will not stand for that.”

“The damage to property is not what keeps us up at night or what bothers us the most, it’s the hate crime in itself and the negative impact to interfaith relations in our community,” the Venerable Vien Hay of the Dieu Ngu Temple, one of the affected temples in Westminster, said in Vietnamese.

“What their motive is and why they would pick on them, I don’t know,” he said.