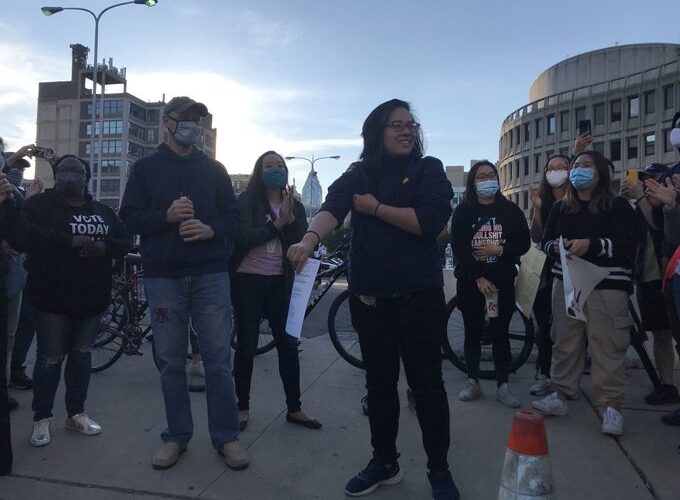 Nancy Nguyen was arrested for "allegedly trespassing and littering"

Nancy Nguyen, 38, is the cofounder of VietLead – a prominent Vietnamese activist group in Philadelphia.

When Vietnamese refugee Tony Pham was appointed to lead ICE, Asian Americans “did not feel optimistic” about him.

VietLead was one of the groups of protesters who demonstrated on 8 September outside of Pham’s house, expressing their concerns about ICE’s treatment of immigrants.

At 730pm on Thursday, city police and federal law-enforcement officers arrested Nguyen at her home for “allegedly trespassing and littering” during the protest.

50 supporters from VietLead, Juntos and other organizations then protested against her arrest.

“Her arrest is politically motivated. It was a message that said, ‘This is what we’re willing to do if you dare to fight back,’ But we have no choice but to fight back,” per a statement from VietLead.

“It is extremely unfortunate that a local community leader was arrested for actions taken while defending the rights of immigrants held by ICE,” they said in a statement provided by spokesperson Irene Reyes Contrera.

Philadelphia City Council member Helen Gym said “it’s important for us to be conscious right now of upholding our civil rights and civil liberties,” not bowing to the “overwrought emotions of a bureaucrat who heads up an agency which has been responsible for the most grotesque human rights abuses of our generation.”

Nguyen was eventually released without bail after 5pm the following day.

“Nancy is a sister,” said Gym. “She’s a leader in our city across the board, she’s been fighting for justice all her life.”

“I didn’t know y’all were here, it’s really cold down there and there were a lot of people down there,” said after he release.

In her statement, Nguyen stated, “there’s a lot of questions and you’ll be hearing more from us.”

In other news, a UN report has accused President Trump of “seemingly legitimizing” the rise in hate crimes against Asian Americans.

THANK YOU BEAUTIFUL COMMUNITY Photo description: Photo of Nancy hugging her spouse with text that reads “welcome home Nancy! Cảm ơn community for helping us get Nancy out!!” Slide 2 text: Nancy Nguyen, the Executive Director at VietLead, has finally been released to her kids and family after 21 hours in detention by the Philadelphia Police Department on trumped up charges at the 8th and Race Roundhouse, at the threat of being extradited to Virginia. She was handcuffed while changing her 1-year-old’s diaper, before she had any dinner. Slide 3: Nancy was targeted for speaking out publicly against ICE Director Tony Pham for using his Viet refugee status to spearhead their terror campaign against Black and Brown immigrant and refugee communities. The news of her release came after a nationally organized call storm and media campaign to #FreeNancy. The Philadelphia Police Department repeatedly and purposefully obscured, withheld, and gave the public misleading and false information to deter our efforts. We continued pushing alongside many, many comrades, youth and beloved local and national community who worked tirelessly to make sure that Nancy comes home. Slide 4 text: THANK YOU for showing up in the face of state violence and intimidation and for showing them the love that we are made of. We will continue struggling towards our collective liberation like seedlings towards the sun. Together we are strong, together we can win. Đoàn kết gia đình hỡi, Đoàn kết gia đình ơi! #FuckTonyPham #AbolishICE #FuckPPD #AbolishThePolice #WeLoveYouNancy #WeLoveYouCommunity