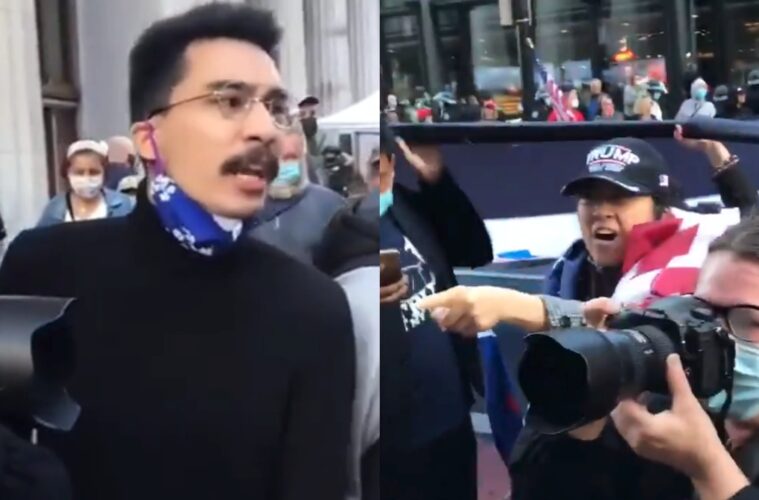 "If any of my fellow Asian-American comrades have something to say about what I did, I’m willing to listen to you"

A Joe Biden supporter has been caught on camera spewing anti-Asian hate.

According to Asian Dawn, the incident occurred at a political rally in New York where Trump and Biden supporters descended into verbal abuse.

Identified as Nicholas James, the man is seen in the video shouting, “film me! Film me you fucking chinks! Fucking dumbass chinks!”

An Asian woman draped in an American flag and Trump hat responds toJames, “you are racist!”

“Fuck you!” James replies, “shut the fuck up you dumb scribble racist pieces of shit!”

James then turns away, puts on his blue mask, and walks away.

“What I said yesterday was undeniably vitriolic and hateful,” he wrote. “It wasn’t constructive in any way. I know this, and I won’t apologize for it.”

“I’m not going to hide behind the excuse that anger justified my words, they don’t, because I chose those words purposefully. I chose to use a slur that was used against me my whole life.”

“I chose to use language that would strike a nerve. If any of my fellow Asian-American comrades have something to say about what I did, I’m willing to listen to you, I’m willing to talk about how it made you feel, and how you feel it affects our community.”

In other news, President Trump is gaining support from Asian American communities.