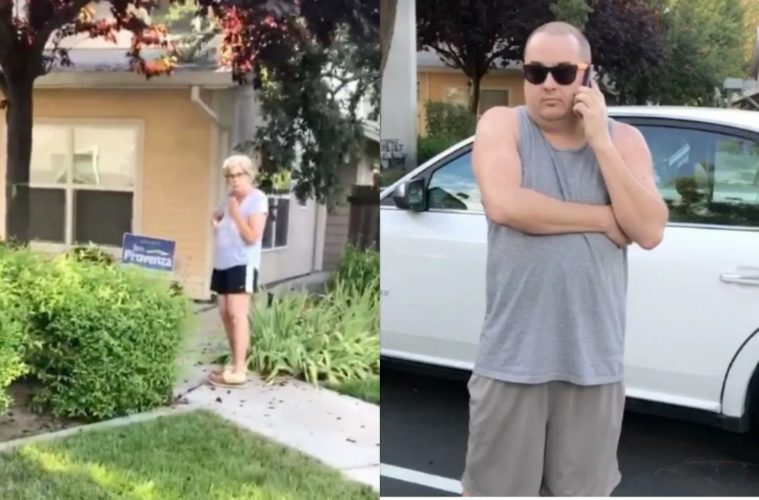 "Do you know anyone here?"

An Asian American doctor who was visiting his parents in Davis, California, was confronted by white neighbours who called the police on him.

Khoa Lim was Facetiming his wife from outside his parents house when an elderly white woman began following him.

“Do you know anyone here?” She asks after Lim started filming her. The woman reportedly said he did not belong her and asked him to leave.

She then headed back home and threatened to call the police as Lim aptly nicknamed her “Karen”.

Detailing the incident online, Lim wrote, “well, if she really was just a friendly neighborhood watchdog, she should have stopped after she learned that I was visiting family. Still threatened to call the cops on me, then why leave when she realized she was on camera? I was holding a phone, not a gun.”

Later that same day, Lim was confronted yet again by another white neighbour. This time, Lim had gone outside to text a friend before the man started accusing him of taking photos of people’s houses and cars.

Lim filmed the man, who he nicknamed Ken, as he called the police, reporting him for photographing people’s property.

“Two police officers came and talked to me at the parking lot,” Lim wrote. “My parents came out for validation purposes and support. I explained to them what happened. This officer, Morgan Hatcher #220, felt compelled to lecture me on ‘perspective’ and that Ken said he ‘didn’t know what to do because I had repeatedly asked him to call the cops’.”

“WHAT?!! Putting this back on me?? I said, ‘Do I look suspicious, like a terrorist or robber?’ Hatcher laughed and said, ‘Do I know what terrorists look like?’ Wow…”

A claim against the officers for “racial profiling, bias-by-proxy, discrimination and harassment” based on the Racial and Identity Profiling Act of 2015 was filed by Lim.

Lim said his motive of uploading the footage was not to trigger harassment of the individuals involved but just to spread awareness about the issue.

“PS. I’d like to say that I would highly recommend against harassment of these individuals (in any form) in the lens of social justice,” he added. “That would be the exact opposite of my goals in bringing up this incident. I just hope this serves as a learning opportunity for all parties involved, including myself. And as a social message for the rest of us to be more culturally and politically aware and appropriate, so that in the near future, we can all coexist in harmony.”

In a similar incident, a woman in California nicknamed ‘Ranger Karen’ harassed an Asian family who were hiking on a trail by telling them that they “couldn’t be in this country.”