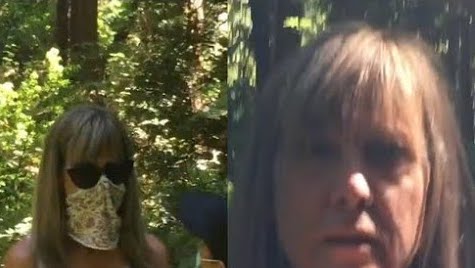 ‘You guys can’t be in this country’: Park Ranger Karen scolds Asian family in California

The woman prevented the family's 11-year-old daughter from moving

A woman in California harassed an Asian family who were hiking in a trail by telling them that they “couldn’t be in this country.”

Now nicknamed Park Ranger Karen, the woman interrupted the family who were trekking in the woods an hour from their house.

The woman particularly took issue with the family bringing their dog with them on the trail.

“Everyone we crossed paths with was respecting social distancing,” the video states. “Everyone except this lady who blocked our 11-year-old daughter and refused to let her pass.”

The woman, who identified her later in the video as ‘Beth’ claimed the family were breaking the law by bringing their dog with them.

“We brought our 11 pound Maltipoo with us,” the YouTuber uploader stated. “Along the hike, we saw several other hikers with their dogs.”

Beth then pulled out her phone and threatened to call the police.

“You guys you can’t be in this country,” the woman says. “You can’t break the law.”

Eventually, the woman passes the family and the man filming turns the camera to himself and says, “you guys saw that right? She said we can’t be in this country even though I was born here.”

The description of the video on YouTube adds, “Our 11 year old daughter was in front with our dog on the leash. The lady aggressively stepped in front of our daughter and blocked her path. ”

“She began telling our daughter that we were breaking the law. My wife, who was behind our daughter asked what was going on, and the lady told us to turn around and go back to where we came from…more strangeness then ensues.”

In related news, a racist woman in Torrance who assaulted Asian people was released on a $1 bail.