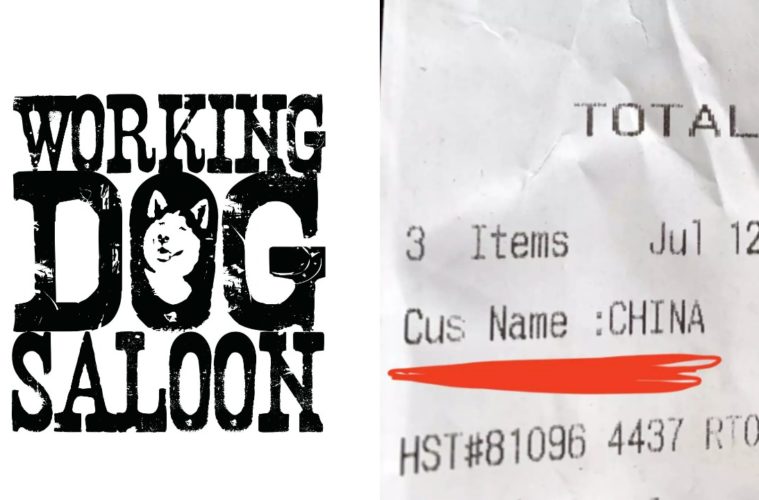 A Toronto restaurant server was fired for writing “China” on an Asian couple’s receipt.

The incident occurred at the Working Dog Saloon in Scarborough on Sunday 14 July at 2pm.

Tracey Yang and her boyfriend were at the restaurant for lunch when they were given a receipt from a server named Sarah with “China” written as the ‘Customer Name’.

Yang said they were the only Asians in the restaurant and the server showed no remorse for her actions.

“We were the only Asian customers at the time,” said Yang. “When I confronted the server about it she completely brushed it off.”

Yang then tried emailing the restaurant multiple times but received no response.

However, owner Siva Velippillai has since said there will be an investigation immediately into the matter and agreed that the server’s actions were racist.

Velippillani confirmed that the server claimed writing “China” was a typo, but was consequently fired.

The server had claimed she intended to write “Chan” based on the name given by Yang and her boyfriend but the system autocorrected the name to “China”.

Yang was not convinced by the server’s explanation.

“I just find it ridiculous that she came up with this excuse when it is obvious what she meant by inputting ‘CHINA’ under the customer name,” said Yang.

“It wasn’t until the server in question’s complete unawareness and compassion to the situation that I realized she was not telling the truth,” Velippillani said.

“It is really unfortunate this happened and I thought it is important to share this… especially considering the current climate with racism,” Yang said.

“This is not something you expect to happen in a multicultural city like Toronto and I wanted to do my part by sharing my experience as a minority in this city.”

In related news, a racist Nazi-saluting man in Canada threatened to behead a Filipino woman who turned him down.