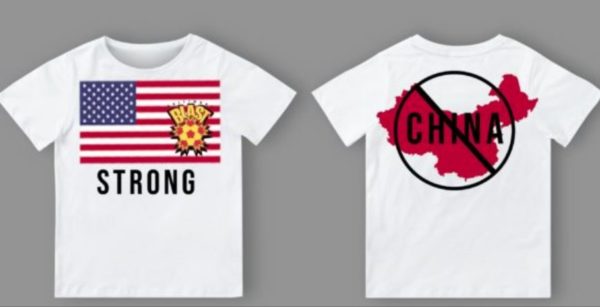 The owner of soccer team Baltimore Blast is defending an anti-China team T-shirt.

On the front of the $20 shirt, an American flag is featured with “Strong” printed underneath it. The back of the T-shirt shows a map of China as well as the word “China” with a circle around it and a line through it.

Although temporarily removed from the team’s website, club owner Edwin F Hale Sr said he hoped to restore the shirt back online as soon as possible.

The shirts, which were available on the website since March, are now sold out.

“I have a great affinity for the people of China,” Hale said, adding that he blames the Chinese government for the Coronavirus.

“It has affected our country to the effect that I don’t like it,” he said.

Anyone complaining should “get out of the basement where they’re living,” Hale continued. “I don’t care what they think because they’re wrong. They want to talk about me for being insensitive — what, are you kidding me? It’s not about the people. It’s about the Chinese Communists.”

Asian American and Pacific Islander communities have called out the shirt for racism, demanding that the team apologises.

Clarissa Chen, member of the Chinatown Collective and Charm City Night Market, said in a statement that the attack on the Chinese government trickles down to Chinese people.

“We’re not claiming the Chinese government to be without faults, but this graphic lacks nuance and does not open discourse. Rather, it suggests exclusionary nationalism, which we cannot condone as a collective that promotes cultural exchange,” Chen said.

Even fans of the team said a boycott might deliver the message to the management that hate speech should not be tolerated.

“Institutions need to be held accountable for their mistakes,” said Baltimore Blast fan Owen Silverman Andrews. “Fans who care about racial justice should hit these institutions where it hurts: in the pocketbook.”

On Baltimore Blast’s Facebook page, the team shared support for Black Lives Matter after the killing of George Floyd.

“The Baltimore Blast strongly condemns racism in all forms,” the team’s statement said. “We stand arm and arm, hand in hand with those who seek to inspire change. Black lives matter and we stand by those living in fear.”

Chen called out the message for insincerity.

“If the Baltimore Blast claims they do not have ‘room for violence, bigotry, or prejudice,’ they should remove this shirt, publicly apologize for it, and take additional action to repair their internal staff culture that allowed this to occur,” she said.

In related news, an order placed at a San Fransisco Asian snacks restaurant was riddled with racist language.

Meanwhile, an 89-year-old Chinese American woman was slapped in the face and set on fire in Brooklyn.