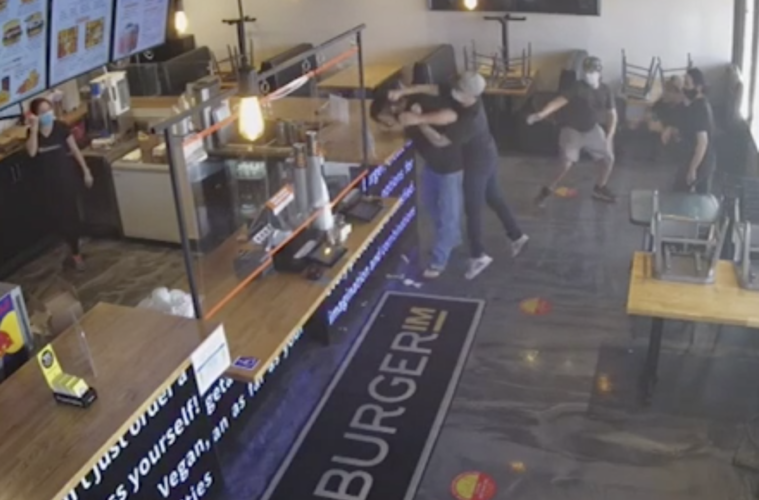 ‘F you and your chinky policy’: racist BurgerIM customer blames Vietnamese staff for Covid-19, gets beaten up

"Go back to China"

A racist BurgerIM customer was caught on CCTV throwing his drink at a Vietnamese staff member and consequently getting punched.

Stephen Tran was working at his family-owned BurgerIM franchise in Carmichael, California, when a customer refused to wait outside for his order.

Since start of the Coronavirus pandemic, the restaurant’s policy has been to not allow dine-in and for customers to wait for their food outside or in their vehicle.

Refusing to obey the policy, the customer threw his drink at Tran, who offered him a full refund, and began shouting racist abuse.

“So he threw his cup at me,” Tran explained. “And, mind you, that in the middle of a pandemic, it’s COVID, so we don’t know that he has COVID or not,” he said.

“He just said, ‘F you and your ch–ky policy,’ threw the little pager on the table and started walking out,” Tran recalled.

The man returned and “started saying, why does he need to get out, and he just called me COVID, told me to get back to China.”

In the clip, an enraged Tran is seen retaliating to the man’s violence and throwing a few punches back at him.

“Jumping on the counter, it was a reflex,” Tran said. “Just that this guy needs to get out of the store as soon as possible, because he was becoming a danger to all of the staff there.”

Sacramento County Sheriff’s officials are unable to press charges as the footage does not contain audio.

However, the man was issued a no trespass notice for BurgerIM.

By sharing the video footage of the incident, Tran hopes that the public will learn to respect F&B workers amid the pandemic.

“Now it’s finally happened to me, and it’s like wow,”Tran said. “Like, everybody needs to be educated to be humble and respect others. That respect factor there is, like, a lot of people don’t have it anymore. The society has changed a lot.”

In related California news, an Asian American doctor who was visiting his parents in Davis, was confronted by white neighbours who called the police on him.

Our Asian Brother, Stephen Tran fought back. He wasn’t going to take sh*t from anyone. These are his words: