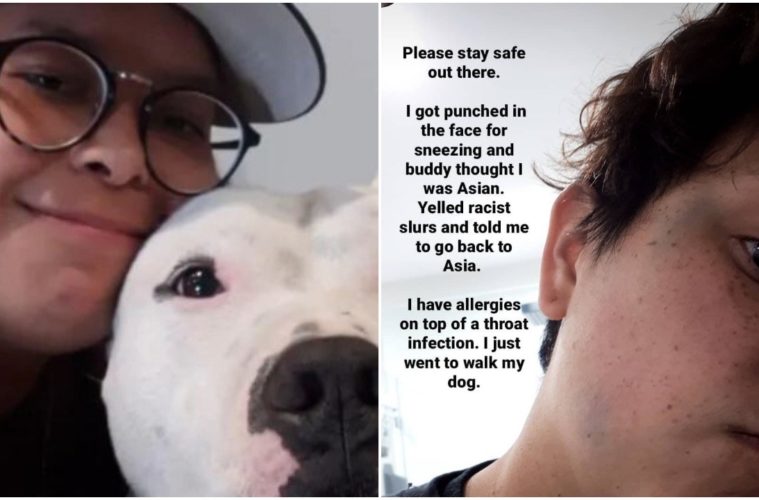 Dakota Holmes credits her dog Kato for driving off her attacker

SCMP reports that an indigenous Vancouver woman was punched after she sneezed in a racist Coronavirus incident.

Dakota Holmes, 27, was walking her dog Kato through Gray’s Park on Friday at 830pm when she sneezed.

A man who had already passed her from the opposite direction, then turned around and began spewing racist abuse about Covid-19. He was heard shouting “go back to China” before punching Holmes in the head twice, knocking her to the ground.

“When I turned around to face him, he started coming at me, yelling in my face and then he punched me, in the jaw, and then above my eye, my temple area,” Holmes said.

Kato, a 45kg Dogo Argentino started biting her attacker’s ankles. “If Kato thinks I’m in danger, he could do some damage,” Holmes said.

The attacker threatened to report Kato to authorities who would confiscate the dog because of it “being aggressive.”

“He somehow was trying to turn the story around, to him being the victim of the situation,” she said.

The attacker eventually ran off.

Holmes described her attacker as a Caucasian male about 180cm tall and weighing around 90kg. He was wearing a hat and dark jumper at the time.

This is not the first time Holmes has experienced racism against her ethnicity.

“I’ve been in situations like this before, being indigenous,” said Holmes. “I try not to get involved. I try not to say anything back … I think the only thing I said was ‘I’m not Asian, I’m indigenous, I’m from here, I’ve been here my whole life’.”

Anti-racism activist Fo Niemi said indigenous people in Canada are often mistaken for Asians.  Niemi is the co-founder and executive director of the Montreal-based Centre for Research Action on Race Relations (CRARR).

“Rising incidents and reports of anti-Asian racism and xenophobia can spread to other groups in Canada who look Asian, ranging from Inuit people to Latin Americans,” said Niemi.

“Hate spreads when people look for scapegoats and believe that they can act violently and hatefully towards others with impunity.”

Reflecting on her experience, Holmes expressed gratitude that it didn’t happen to someone else and urges other people to speak up about racist incidents.

“I’m kind of glad it happened to me and not someone else,” she said. “I’m used to it. It’s another day in my life … even though he got the race wrong, I’m still used to it.”

“The only reason I’m sharing this story is that racism is not OK. If anyone else experiences something like this they should speak out. We’re all in this together.”

Crimes towards Asian Americans in Los Angeles have surged during the Coronavirus pandemic. Meanwhile, NYPD also issued its latest crime report, showing that crimes against Asian Americans were on the rise in April.

Most recently, a 57-year-old man was arrested in Wisconsin for racially abusing a group of Asian people.